Ray Somera presented on the 2003 Pohnpei Accord for inter-institutional cooperation for transfer and articulation between College of the Marshall Islands, College of Micronesia-FSM, Guam Community College, Northern Marianas College, Palau Community College and the University of Guam. He also covered the Palau Protocol. The 2009 Palau protocol does not appear to be available on line, and the Pacific Post-Secondary Education Council web site was last updated in 2001, over 22 Internet years ago.

Ray noted that subsequently, in November 2010, there was a further Hawaii-Pacific Inter-Institutional cooperation agreement that has Pacific island institutions work on articulating with University of Hawaii at Hilo and the UHH in turn works with UH Manoa on Oahu. There has been no further movement on articulation agreements since. 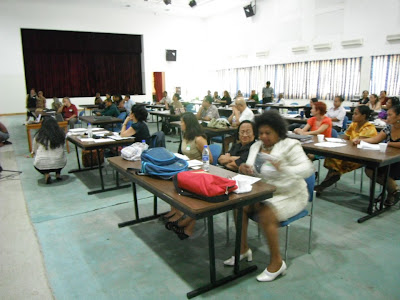 Dr. Kathy Hayes and Karen Simion engaged the conferees in a whole body exercise, with groups moving table to table to answer questions about student learning outcomes. As I was also on my feet, I did not take notes.

Dr. Helen Thompson spoke on improving course planning. She also noted the work on bridging with the community through organizations such as Island Girl Power Guam. Island Girl Power works on addressing issues such as teen pregnancy, suicide, substance abuse, and sexual abuse.


NMC's Velma Deleon Guerro and Barbara Merfalen led with the shirtless leader video which notes that one is a lone nut, or simply two nuts, until a second follower join. Three is no longer a bunch of nuts, three is a crowd, and three is news. Little wonder He said that whenever three of you gather, I will be there. Three as the start of a movement has been recognized for over two millenia. 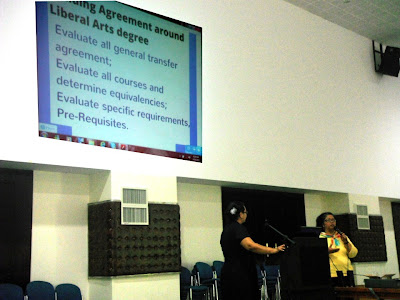 Velma subtly demonstrated her own willingness to be different from the crowd and used Prezi's cloud-based zooming presentation package.

Under new leadership, NMC has set a goal of going paperless in all areas.

85% of the NMC's students place into one or another developmental sequence. The college is partnering with the secondary schools, community, and parents to find ways to better prepare students for college. Saipan is culturally complex and experiencing economically challenging times. 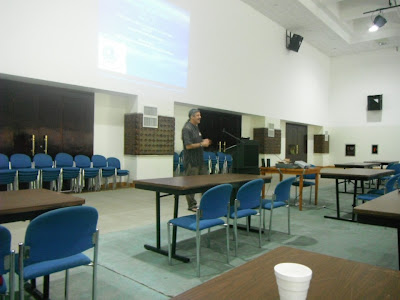 Don Hess noted that CMI will be developing a first year seminar course, CMI 101. He noted work on articulation of courses with UH Hilo. At the end of this session there was mention of the National Student Clearinghouse to track alumni who have transferred to or enrolled in other institutions.

As an example, he noted that expository writing courses tend to move either from sentences to paragraphs to essays (grammar driven), or from essays to paragraphs and then down to sentences (content driven expressivist approach). He then noted that he does neither, starting from the paragraph and then moving up and down as and when necessary. This is referred to as a recursiveness approach.

He then led the workshop through the actual process and method, making concrete what he meant. In the concrete I came to clearly understand both his methods and the concerns he would have about grammar driven or expressivist approaches to achieving student learning.

One detail that caught my attention was that to address students tendency not to read texts, he has the students read aloud.
Dr. James Sellmann then wrapped up with a presentation that included the distinction between indirect, inauthentic assessment and direct, authentic assessment.