March 11, 2012
In laboratory nine the physical science class synched clapping boards to echo arrivals to generate data that leads to measuring the speed of sound. Distances were measured using our most accurate GPS unit. 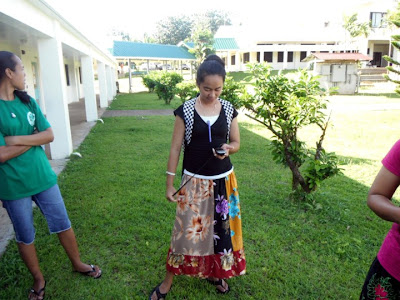 The class began with a determination of the dry bulb (32°C at 11:00) and wet bulb (28°C) temperatures. Using the tables from section 8.1, the relative humidity was determined to be 74%. The class was later instructed to use WolframAlpha to determine the theoretic speed of sound in air. The value that I learned long years ago in school is about 20 m/s slower than the usual sound speed on Pohnpei, due primarily to temperature. On a crisp fall day in the midwestern United States the text book value of 330 m/s is fairly accurate. On Pohnpei sound never moves that slowly. 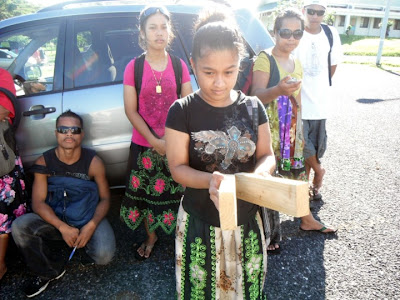 Marie claps the boards in front of the LRC 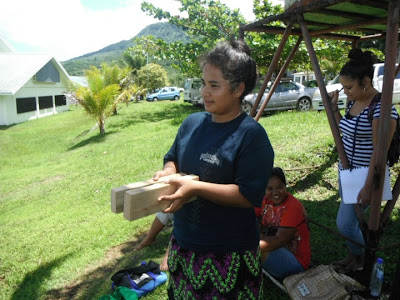 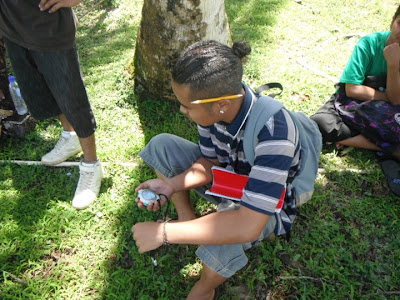 A meta-study suggests that the 8:00 class is consistently closer to the correct value for the speed of sound than the 11:00 sections.The consistently lower sound speed values at 11:00 mean that the section is consistently clapping too slowly. One could argue that the midday sun and heat causes some form of lethargy, but I am aware of this differential and even with that awareness the speed came in too low. I know that 11:00 has a history of reporting to low a speed, but in the field I cannot see what is going consistently wrong.
physci