March 03, 2012
The unit on healing plants began with a visit to the traditional plants of Pohnpei ethnobotanical garden at Pohnpei campus. Our host, Totoa Fetalai-Currie, introduced the students to the garden. She quizzed the students on their knowledge of their local plants and explained some of the uses of the plants. 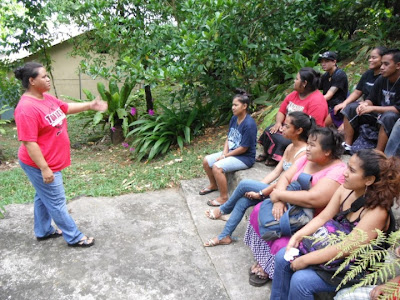 Ms. Fetalai-Currie noted that the role of retaining and conserving the knowledge of the plants lays with the students themselves. She noted that there would come a time when those of us who teach would move on. 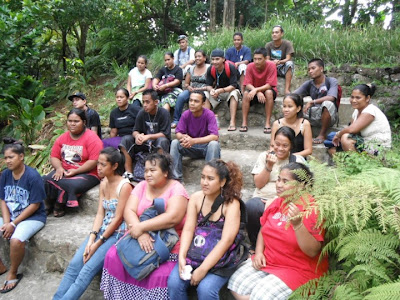 On the second and seventh of February the students did presentations on healing plants. 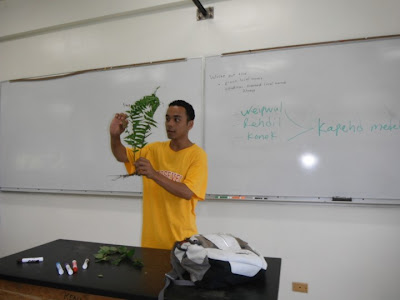 Rico Rico covered the use of a three plant mix of weipwul, rehdil, and konok to relieve kapehd medek (stomach ache). From the konok remove four end points of the vine, from the rehdil remove four fiddleheads, from weipwul the youngest two pairs of young leaves that are still closed and touching each other. Chew all and swallow. 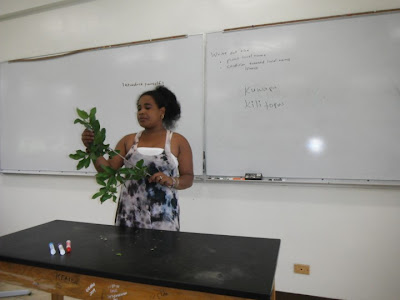 Cindy Hairens covered the use of kuwapa to treat the symptoms of kilitopw (chicken pox). The leaves are used in an immersion bath to reduce itching. 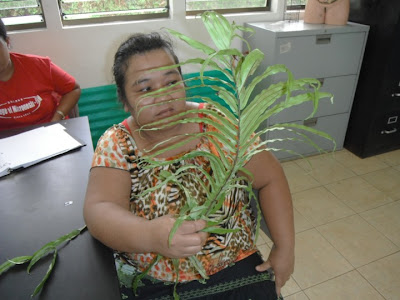 Rosalina Harris brought in Blechnum orientale which she called marekenloang although the fern is terrestrial. She noted a counting scheme of skipping two pinnae and picking the next one until one had 16 pinnae to put into hot water for a tea. The tea is consumed to stop prolonged menses. 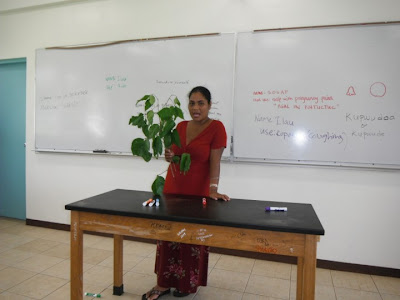 C-Leen detailed the use of sekesek (Allophylus timoriensis) for silasil. She noted that four young leaves are pounded, placed in a small cloth, tied, and then hidden under clothing or elsewhere. This protects the wearer from other sicknesses when one has an enemy.

In Ethnobotany of Pohnpei Balick (2009) reports that A. timoriensis is used as a charm to cast away evil spells. The young leaves are pounded and rubbed on the skin [Valentine Santiago: MB 4112].

Use as wini en silasil (a charm for protection against spells, sekesek means "bounce" as in "bounce back" the bad medicine) is more detailed in Balick. Pretrick Panuel reports that eight young shoots are mashed together in the hands (probably by a rolling action), placed in the center of a cloth, covered with the dust from two river rocks rubbed over the medicine, and then covered with coconut oil. The cloth is then folded and squeezed, with the medicine then rubbed all over the body for "very strong protection."