March 01, 2012
Monday was occupied with watching climate change videos, thus review coverage of the midterm fell on Wednesday. With the weak performance on the midterm, the review took half the class. 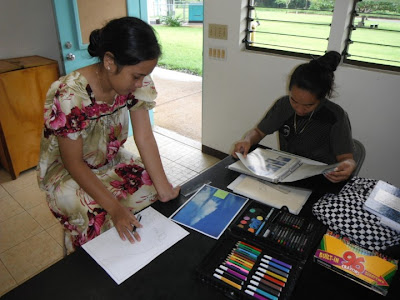 The second half of Wednesday was occupied with coverage of the terminology used in the videos on Monday: king, spring, and neap tides, green house gases, water vapour, carbon dioxide, methane, global warming, and current climate trends. I finished the class with a demonstration of how to calculate the relative humidity, the heat index, and the risk for athletes due to heat, all of which is in section of 8.1 of the text. 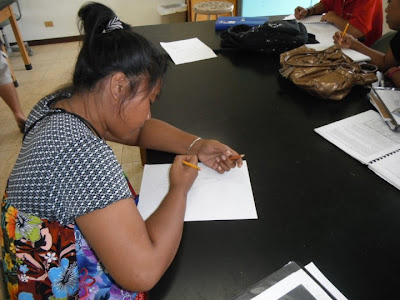 Thus types of precipitation fell onto Thursday and started laboratory eight. Once again I suspended an "artificial cloud" from the overhead track - an aluminum can with ice inside. I then reran the relative humidity, heat index, and risk calculation using the current conditions as read from a thermometer.

After covering the types of precipitation, the class moved up to the computer laboratory for an unplanned session of viewing clouds in a cloud album on the SMART board. I did this in part because, unlike prior terms, the class had not had prior "cloud introductions." In prior terms I have brought the class outside on "good cloud" days prior to chapter eight, this term I have not done that. 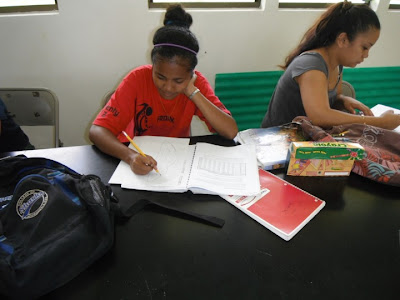 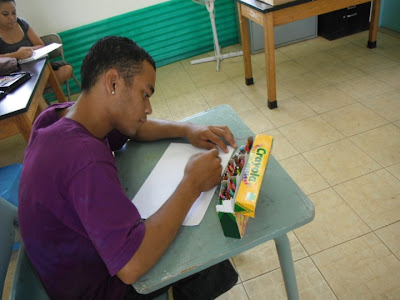 Then the class came inside to work on cloud drawings. The traditional start to laboratory eight - the reading puzzle poem - was not done this year. 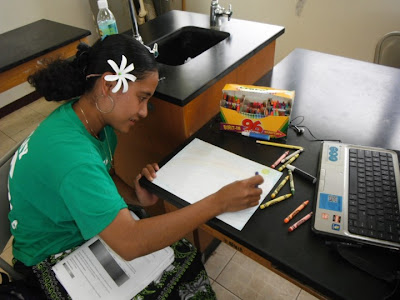 Board notes on precipitation. Click to enlarge. Quiz 084 utilized modified versions of these images. 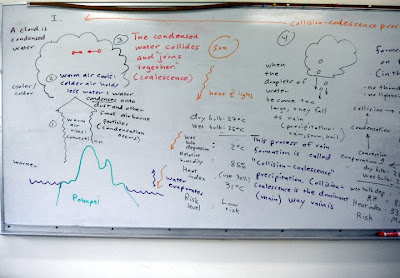 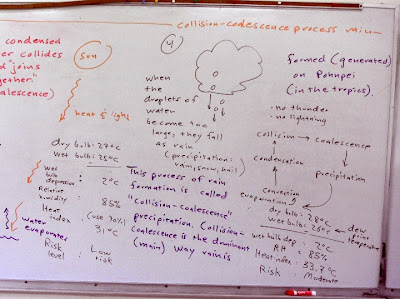 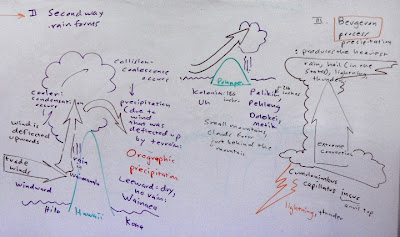 The judging process was handled by an increasingly well trained pair of experienced drawers. The images are arranged in columns according to the accuracy of the shapes, forms, and colors used as specified in a rubric. 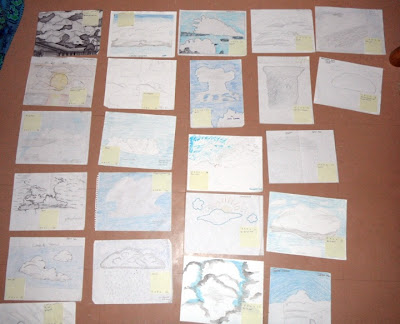 Then the images are arranged vertically according to composition quality, consistency in drawing style, and effort/craftsmanship evidenced, as also specified on the rubric. 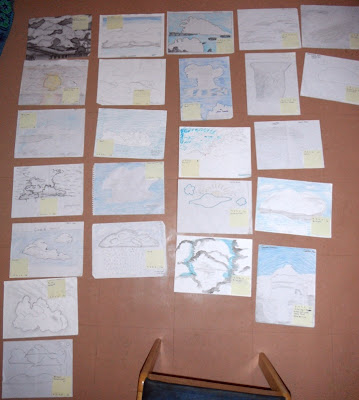 The rubric has to be used flexibly with respect to the color dimension. Clouds do have color especially at sunrise and sunset, but midday clouds are generally shades of white with contours shaded of gray. 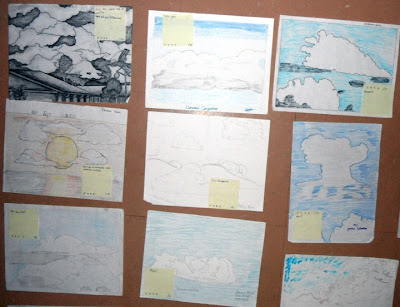 The first three in the five, four, and three point accuracy columns.

The top scoring image (upper left above) generated a healthy discussion between the judges. Both felt the drawing was superbly done, but one judge questioned whether the clouds themselves were the most scientifically accurate rendition of clouds. The judge recognized that the object was the accurate depiction of a nameable cloud type, an accurately rendered sky image. The other judge was taken with the overall composition and craftsmanship exhibited.
physci