August 17, 2011
A convenience sample survey of 61 students in the MS 150 Statistics class at the College of Micronesia-FSM Palikir national campus 15 August 2011 asked about social media membership.


Number of students with membership in the listed site by term
Note that the columns do not add to the sample size as students can have multiple memberships. 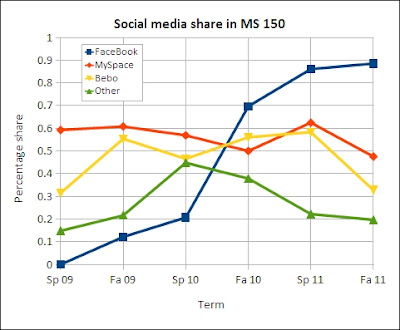 FaceBook extended its dominant position among statistics students at the college, while MySpace and Bebo lost market share among the students. FaceBook has risen from zero in spring 2009 to social media hero in 2011.

The appearance of FaceBook on the spring 2009 survey may have caused to students to investigate the site and begin signing up for accounts. Because the survey and this report may have the unintended effect of driving "membership out of curiosity", the sites included in Other are not listed in this report. In the Other category twelve students reported membership in seven sites with no site having more than three members.

A study of whether students use only FaceBook, MySpace, Bebo, or some combination of the three is shown in the following table.

In addition, when asked in which site they have the most friends, 53 reported FaceBook, one reported MySpace. The remaining students did not answer this question.

Four students self-reported no social site membership. Spring 2011 eight students had self-reported that they do not use a social media site. That is a drop of 50% while the sample size only decreased by 15%.