June 24, 2011
Section 091 began with a RipStik sine wave and continued on to consider a bouncing ball and waves on a light chain. I ripped the paper oddly, wound up with three sheets. The wave was pretty horrible, I found only one usable section on a 68 cm wide portion of paper. The data can be seen below. 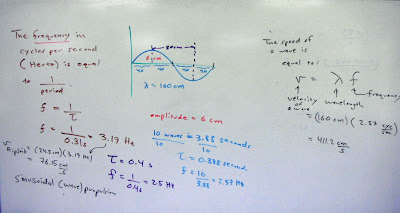 In laboratory nine the physical science class synched clapping boards to echo arrivals to generate data that leads to measuring the speed of sound. The class began with my bounding a ball off of the back wall, the ball that I had used in the lecture in the morning. I think this really helped make clear the concept of the echo flying out and back. I measured the distance to the wall and back, I also timed the ball flight time. Then I worked out the speed of the ball. I think this helps make the lab below more concrete.


a determination of the dry bulb (32°C) and wet bulb (28°C) temperatures. Using the tables from section 8.1, the relative humidity was determined to be 74%. 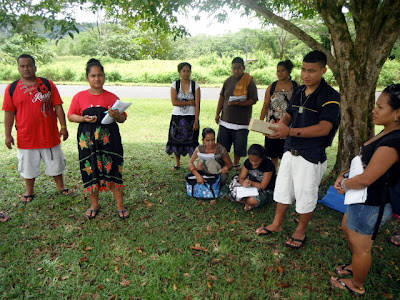 Maimai times ten seconds while Raynard and Lavanaleen count board claps. Lewis maintains rhythm with the echoes. Mary-ellen and Tracy record data while Kemble and Arthur look on. 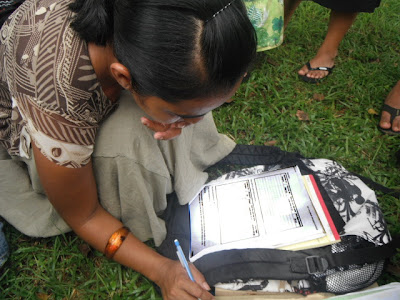 Mary-ellen Kerman enters data on behalf of the class

The value that I learned long years ago in school is about 20 m/s slower than the usual sound speed on Pohnpei, due primarily to temperature. On a crisp fall day in the midwestern United States the text book value of 330 m/s is fairly accurate. On Pohnpei sound never moves that slowly. 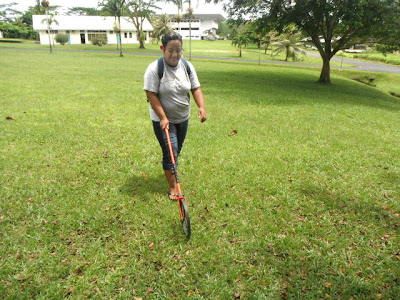 This summer I opted to use the surveyor's wheel in lieu of using a GPS as I had not introduced use of the GPS to obtain distances in meters during laboratory seven. With the wheel there was no need to discuss the issue of errors in satellite receiver measurements. 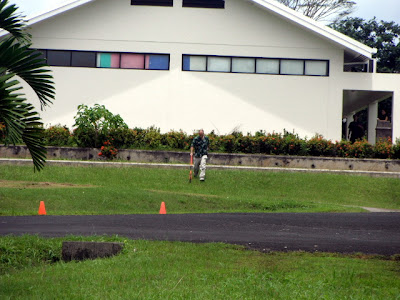 The instructor takes a turn at the surveyor's wheel
Oddly enough, the class obtained different clap counts. This is reflected below in some of the data which was gathered.


The class worked down the main entrance road. The 304 meter out-and-back from the back of the bookstore to the gym was the longest flight distance. 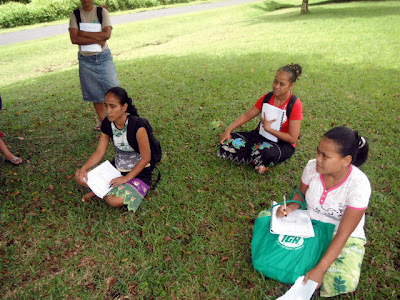 
Using the SLOPE function the data produces a speed of sound that is 12% low. Arguing that (0, 0) must be true and using the LINEST function to force the y-intercept to zero results in a slope of 327 m/s, only 7% below the expected result for the sound speed. Given the basic nature of the equipment used - boards
being banged in synch with an echo by hand and ear, these results are excellent. The new, larger and more reliable stopwatches were a real plus in this laboratory. 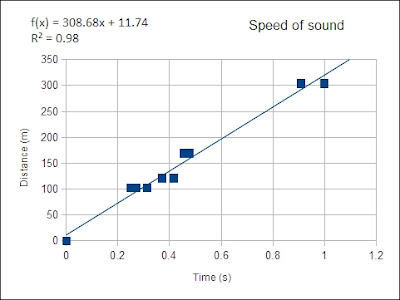 The downside to using a linear regression is that the farthest out point dominates the slope value. Thus a slow synch off of the gym dropped the overall value. While longer distances would seem to be more accurate, the reality is that keeping a beat that is out at roughly one second is difficult. The overall average is 343 m/s which is only 2% low. I prefer to continue the focus on linear regressions, but the average usually outperforms the slope in laboratory nine. 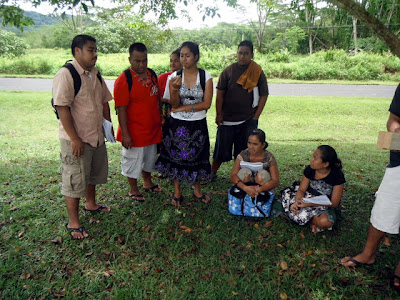