June 24, 2011
Mostly inspired by my own vehicle, but also in part inspired by MythBusters, I decided to test anti-fog options for cars without air conditioning in the marine rainy tropics. I opened the laboratory by coating both sides of one piece of glass louver with Rain-x Interior Glass Anti-Fog

. I intentionally kept the bottle obscured behind items on my desk and I did not draw attention to what I was doing. I put the Rain-X coated glass and an uncoated louver into a stand-up freezer for thirty seconds. When I took out the louver pieces, one fogged up and the other did not. 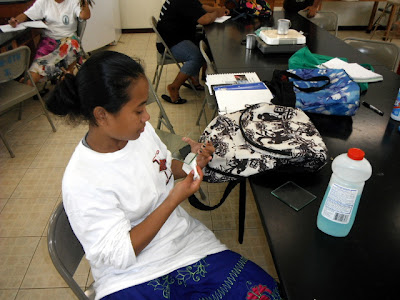 Tracy applies ammonia to both sides of a piece of glass
The class, which had not been paying any attention, was now puzzled by this occurrence. A quick poll found that roughly half the class was acquainted with local cars in which the air conditioning did not work - the primary if not only choice for clearing a foggy windshield in the tropics. Heat will also work, but at 28° C (82° F) few people want to run the heat. 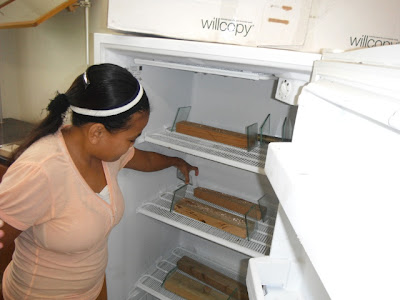 Nayleen places her glass pieces in the freezer
An instructor named Singing-Eagle, a native American, once referred to the cars on the island as "res wrecks," short for "reservation wrecks." Cars that were not necessarily street legal outside of a reservation. Fixing the air conditioning on my car would require parts from Japan that would exceed the original purchase price of the seventeen year-old vehicle. My car is not alone in its air-conditioning deficiency. Many students were accustomed to trying to wipe fog from the inside of the windshield with their hands. 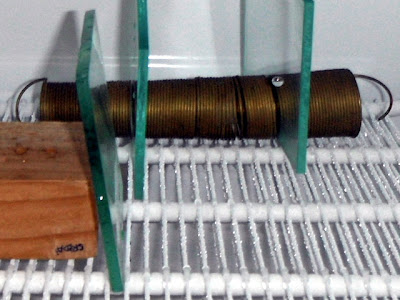 Arrangements inside the freezer, wood blocks and a brass spring
I then revealed to the class that I had used Rain-x Anti-Fog. I also noted that the Rain-x had cost $5.49 at the local island Ace Hardware. And that I had bought the last bottle in stock. I then suggested that there might be local alternative anti-fog compounds. A few students, when asked, were familiar with spitting in their face mask to keep it from fogging when snorkeling. Of course, spitting all over the inside on one's windshield might not appeal to the other passengers in the car.

I then revealed that I had a variety of compounds we could test for anti-fog efficacy, including some that would require rubber gloves to apply and thus might not be as useful as anti-fog compounds due to practical safety reasons.

As the class progressed, pieces had to be kept in the freezer sixty seconds and longer. Opening and closing the freezer caused the interior to warm appreciably.

Results were recorded on the board. 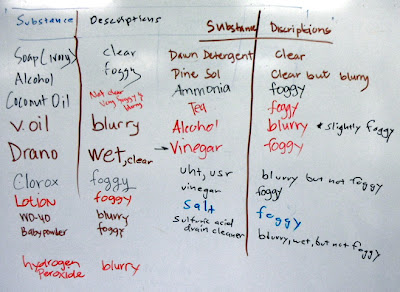 Results. Uht is banana.
Hand soap and dish washing detergent appeared to be the most promising in terms of being widely available, safe, and effective. Some compounds, such as Drano, caused the surface to become evenly wet, yielding a "clear" surface but wet which would distort the road. Not to mention the risk of splashing sodium hydroxide in one's eyes or on oneself when applying the liquid to the windshield.

The laboratory hand-in was only the table, nothing else. The lab lacks a good linear regression or other mathematical model, but is potentially useful to the students in their own daily lives.

Note that the morning lecture remained the standard 081 presentation on humidity, condensation, collision, coalescence. This summer, however, features no cloud quizzes and no cloud material.
physci