May 20, 2011
Starting with Ubuntu 10.10 the Ubuntu font family, designed by Dalton Maag, was rolled out. Ubuntu font is a sans-serif font reminiscent of Trebuchet MS, especially in the small tail on the lower case letter L. This may reflect the hand of Vincent Connare who had worked on Trebuchet MS for Microsoft and is now with Dalton Maag. The letter widths and spacing varies slightly from Trebuchet MS, but the two fonts remain close enough to be used in a CSS font stack as substitutes for each other. 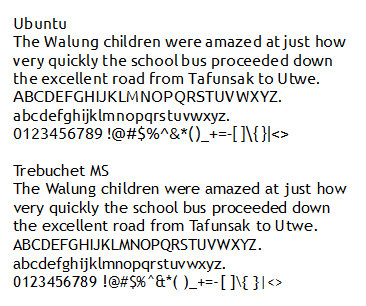 On pages such as a syllabus that is actually a complex SVG diagram in HTML delivered as text/html (HTML5 if you will), having a font that will interchangeably behave in a consistent way between Ubuntu and Windows is critically useful. The office desktop on which I develop is a Windoze box, while the student laboratory is Ubuntu 11.04. Student laptops are also typically Windows boxes along with the library desktops.
html5 tech