April 26, 2011
Clidemia hirta, known in English as Koster's curse, and locally named riahpen rot (dark curse) continues to spread in the forest across the road from the college. This term twenty-five of the twenty-eight SC/SS 115 Ethnobotany class students turned out to pull Clidemia hirta. Only the delegation from Yap was curiously absent. 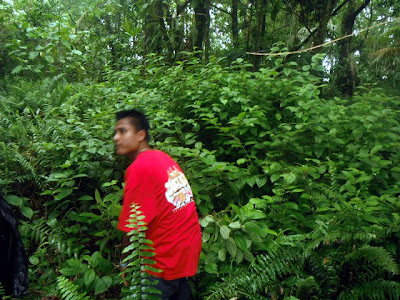 Anthony launches into pulling a clump that is more than head high
The morning was ominous. While Pohnpei is rainy, lightning and thunder are rare. During the morning thundered boomed out across the open spaces of the campus. While thunderheads are rare on Pohnpei, apparently not on the day the class pulls Clidemia hirta. Fall 2010 a thunderstorm crossed campus that same afternoon that six students opted to pull the dark curse. 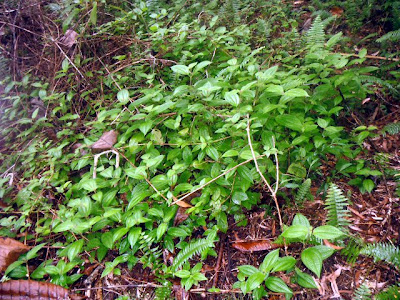 New plants spreading to the west of the original clumps
The hike into the dark, wet, muddy forest on a rainy day that had heard thunder earlier in the afternoon. The class first visited the Palikir Ethnobotanical Learning garden to learn to distinguish the native Melastoma malabathicum var. marianum (pisetikimei) from Clidemia hirta. 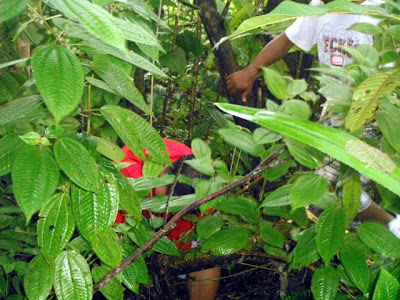 Angelo and Jayheart deep in a thicket 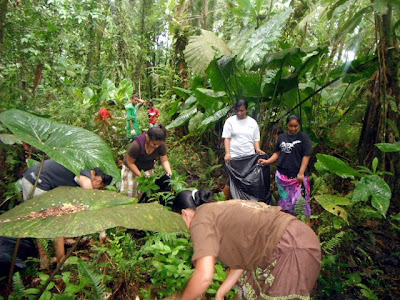 Melinda in the foreground, Vanessa putting plants in a plastic bag for removal, Julie Ann and Syleen holding another bag. The plant is scratchy and wiry, not a fun pulling job. 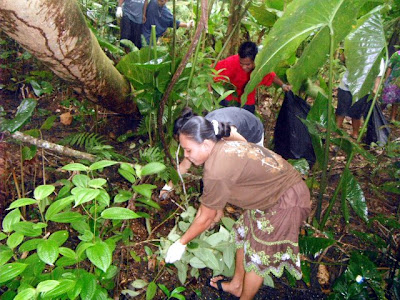 Melinda went all out pulling hefty plants from the ground. 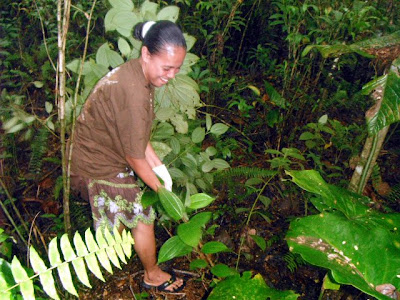 Clidemia is tenacious, Melinda was more so. 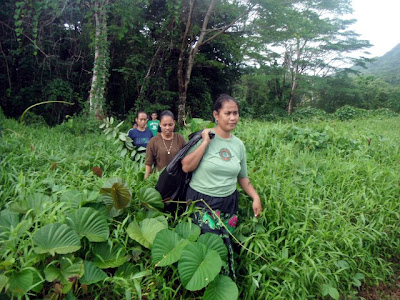 After an hour of pulling, there were still many more plants than any crew could ever hope to pull up. The plant loves the sun, the plant loves the dark places, the plant loves growing on land, the plant thrives on growing in water. The plant does not die immediately on being uprooted, branches freely re-root. This plant is the Borg of plants, assimilating everything in its path. The perfect invasive species. Unstoppable. Aggressive. Seed spread by birds. After a while the plant even looks evil.
ethnobotany
Location: Palikir, Micronesia