Attendance and performance in MS 150 Statistics

May 05, 2009
The college has an attendance policy which effectively permits six absences in a MWF class and four in a TuTh class, the equivalent of two weeks worth of absences. Anything beyond two weeks of absences, excused or unexcused, cause the student to fail the course. With next fall the college is shifting to a policy wherein the instructor sets the attendance policy most appropriate for their course. So with the sunset of the last term under the current policy, here are the statistics on my 56 students in two sections of MS 150 Statistics.


Absences range from zero to 16.5, with the 16.5 being a student who no longer attends the class but has not officially withdrawn from the course and hence remains on the role. The mean is 5.40 absences.

I do not automatically exclude a student from the MWF class based solely on attendance. A regression analysis of absences versus percentage of points in the course has a correlation r of -0.70, fairly strong and an indicator that attendance is linked with performance in the course. 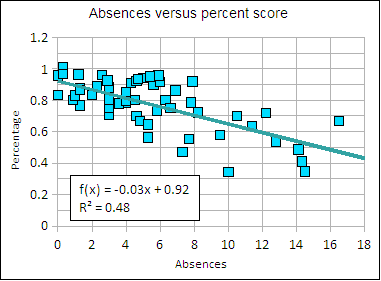 Now if someone will remind a year hence, given I still live and continue to teach MS 150 at that time, to rerun this study I would be much obliged!
assessment statistics