April 08, 2009
Two hundred minutes is my present seven day target for my running. Last week some sleepy evenings knocked my seven day total under 200. By this evening I had whittled the deficit down to 71 minutes. The day had been windy with heavy rain storms moving through Palikir - the Inter-Tropical Convergence Zone was sitting directly over Pohnpei. A tropical trough. 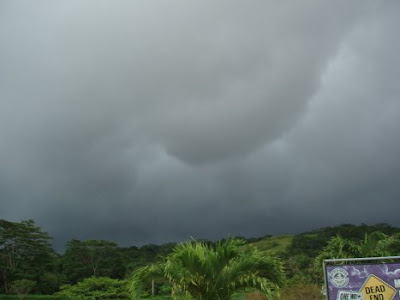 Decks of tropical cloud cover extending from sea level to the top of the troposphere made the day dark. By 17:10 the day was already turning into night, although the sun would remain above the unseen horizon for the next ninety minutes.

As I headed down Dolihner hill toward Blue Nile I could see a gathering darkness to the east. I slipped around the Pohnpei campus gym, through the parking lot, and swung right down the hill toward 4TY. Cars filled with Mand-bound Pingalapese in Wednesday evening church service clothes were backed up at the stop sign in front of the new JG store.

At Ace Commercial I could see the ridge lines of U. Or I should have been able to see them. The ridge line was gone, replaced by a white column of water. Above the sky was black. To the left was a horizontal set of clouds arranged in four ring-like banks. The outer edge of the gust front rode under this ominous looking formation of clouds. Ahead lay only whiteness - a solid wall of falling water.

As I headed toward the storm front I was less concerned about the weather than the impact the weather would have on traffic and drivers. Broken air conditioning units and consequently fogged windows meant that I would have to consider every vehicle as a potential hazard. I know of no one who knows the simple solution of wiping the inside of the windshield down with a lightly soaped paper towel. Pretty much any bath soap will work, at least during daylight hours.

I often run a route out into Nett, and timing of my run often has me out at Nett river bridge late in the day. On sunny days I have raced the lengthening shadows of trees on the bridge, racing to stay in the sunshine ahead of the shadows of the oncoming night. While I might win the shadow race on the bridge, I know that all runs come to an end and the darkness of night eventually wins. Running is about enjoying the journey, the end of a run brings a sadness. So I run for sunshine.

The rain moves but slowly on Pohnpei. For all the vertical violence, the rain was moving toward me no faster than I was running toward the rain. I met the rain out at the Nett river bridge - Dausokele. I slogged through the rain, continuing on past Kusto's market. Only a few die hards were in market at a time when the market would usually already be packed.

At Palipowe junction I turned around and headed back toward Kolonia, soaked to the skin but starting to feel better now that I was headed back into town. My shoes were heavy and wet, I had stopped at 3-Star to re-lace them when Joe passed by headed east toward Kusto's market. Heading up Etscheit hill a cold shiver went through me - something I have not felt in years. One is rarely chilled on a run at six degrees north latitude in the western Pacific ocean.

Tonight I was running in part to log 71 minutes. I suppose I run to stay fit. Yet neither reason explains thirty years of running on three continents and eight islands. Ultimately I run because I have to run. Or more reflective of my 6:45 kilometer pace, I jog because I have to jog. I also had to stop at Ace Commercial to retie the drawstring on my running shorts because I was about to become a 1970s streaker due to waterlogged heavy running shorts with elastic that died a few dozen washings ago. My running shorts are a good five or more years old.

I ran up the waterfront, water rolling over the road from the rain which had eased off. I headed straight on out the causeway, looked to my right, and saw only dark white. No Lenger. No Param. No Nett Point. All gone. A second storm cell was sweeping in from the east. This cell was closer, I had not seen it until I got out onto the open causeway. I was quickly enveloped in a rain-soaked wind roaring in across the lagoon. Big, heavy rain drops make a curious dockety-dock sound on my shirt. They were large enough and being driven hard enough that I felt each drop impact me.

As the front edge of the storm cell moved toward Sokeh's ridge, the cloud above began to block out the remaining light. The world was going dark and fast. I was running against the wind and the rain. Part of me was revelling in the joy of the effort, part of me simply wanted to be home, warm, and dry.

Alone now on the darkening causeway I was lost in my own solitary thoughts. As I turned around at Lidakida, I knew I was going home. My body senses that direction is toward the barn, and an energy flows back into my legs. Though I want to get home, I still do not want the run to end. End it must, end it will, but the joy is in the run, not the finish. Life is about the journey, few want to reach the end of the adventure.

Heading up past the former Spanish garrison of Santiago de la Ascension, a hole in the clouds developed ahead of me toward weather station hill. I picked up the pace through town. State pay day shoppers were stocking in for Easter. At weather station hill I caught up with the eastbound cloud hole. As the main road turned west at centerpoint, I was able to keep up with the hole all the way into Dolihner. My own private patch of dry sky moving with me as I ran.

Unusual for a 12.9 kilometer run that was now an hour twenty-seven minutes old, my skin was cool and dry. I was not soaked with greasy sweat, I did not perceive that I was sweating at all. I turned in at Dolihner and made the porch just as a third rain cell and road level darkness arrived. Above, through the rain, I could that the cloud was gently tinged with a hint of magenta. Somewhere out over the western Pacific the sun was setting.
running