January 19, 2009
The attempt to add flowers on campus, a rather pathetically insufficient effort on my part thus far, has had its first bloom in the area behind the south faculty building. The concept back there is to have small bushy plants that produce the types of flowers favored by students for placing behind their ear - jasmine, tahitian gardenia, and other small fragrant flowers. The collection is meager at best, but at least the jasmine has bloomed. 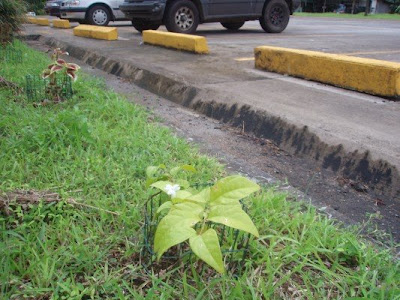 I also attempted to transplant a Lycopodiella cernua - an effort I estimate has a 95% chance of failing due to the unusual growth habit of this plant - and a Spathoglottis plicata Philippine ground orchid. Both are now on the small grassy knoll to the east of the A classroom building. Conspiracies concerning the origin of the grassy knoll abound. Grassy knolls have had a bad name since 1963.