January 18, 2009
The interview assignment was to interview someone who had done something important during World War II, an odd request in a nation with arguably only a single living World War II veteran and few local elders who date from that era. Harvey is 81 and served on the USS Providence (CL-82). The USS Providence was in the Caribbean headed for Japan when the atomic bombs were dropped and the war came to an abrupt end. 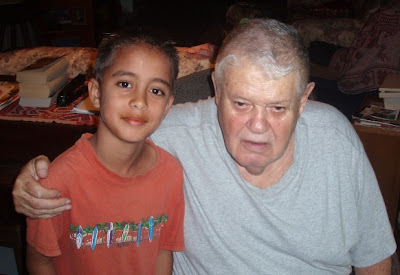 The Providence was redeployed to the Mediterranean where along with two other ships they "showed the flag." The rest of the American fleet was busy shuttling troops home from Europe. Harvey spoke of visiting a number of ports. In Alexandria harbor were British fleet ships. After a few days ashore of captains boasting to other captains, the captain of the Providence opted to take the Providence out of harbor without a pilot and at flank speed. Harvey notes that the ship went hard aground on a reef and it took days of "washing" the boat with the prop wash of other ships to free the Providence. With both propellers damaged, the Providence had to limp and lurch to the nearest dry dock at Gibraltar - the other end of the Mediterranean. Harvey noted that insurance does not cover damage when you decline a harbor pilot.

Harvey also spoke of his youth in Boston. He attended the Harriet A. Baldwin elementary school, an odd foreshadowing of the future. The Baldwin sisters, reputed by Harvey to have been related to the school's namesake, were important figures in the history of Harvey's future home of Kosrae. He remembers going to Boston Red Sox games and to seeing Ted Williams up at bat.