November 23, 2017
I chose this term to follow the path laid down in the summer term - to put up a correctly labelled 3 site swap and then ask if the students understood the diagram. I did not fully explain the diagram.

Then I demonstrated a 3, laid out a 51 and demonstrated that, and wrapped with a 342 swap diagram to show that the equations made testable predictions. This was then tied to two themes: 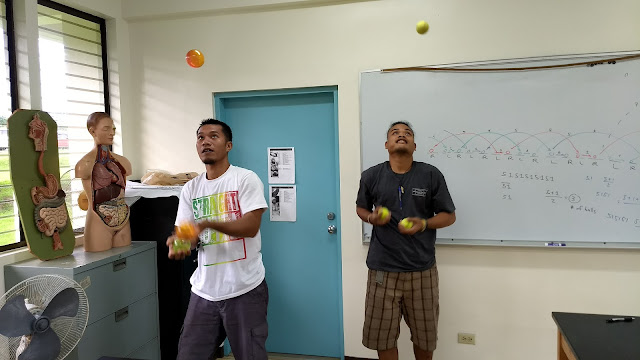 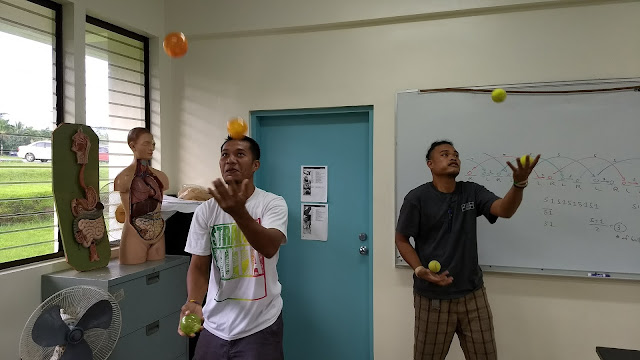 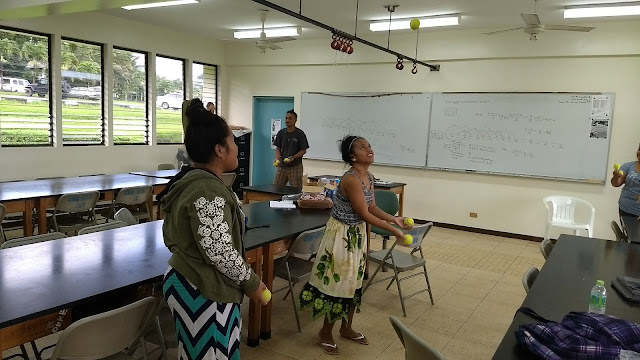 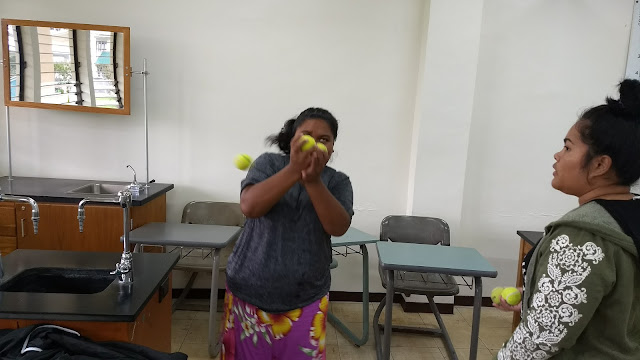 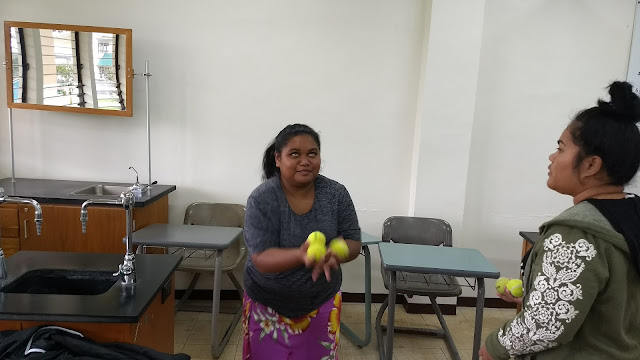 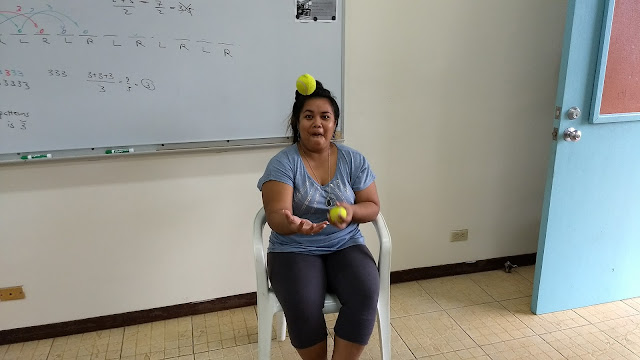 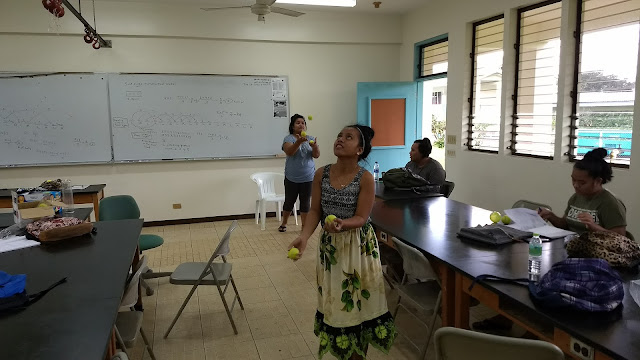 Trevalouva, one ball too high to see 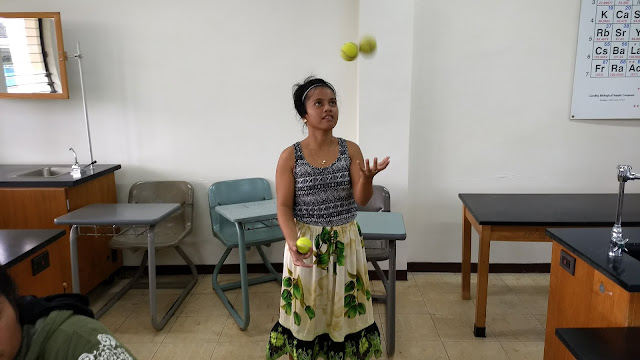 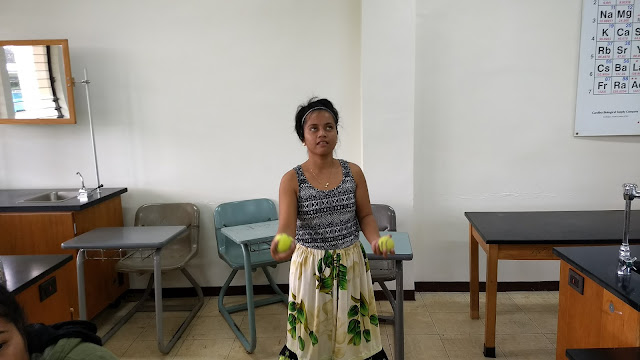 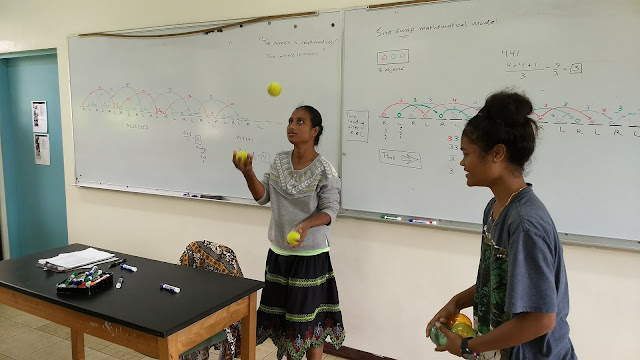 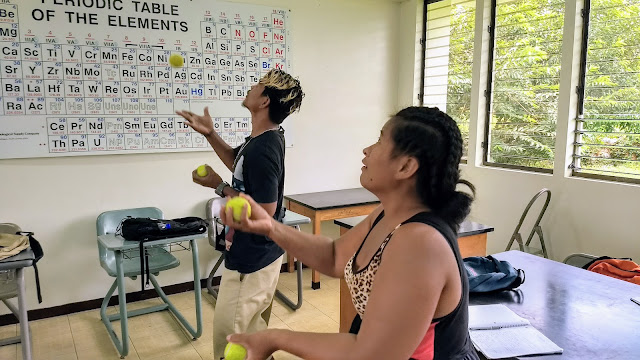 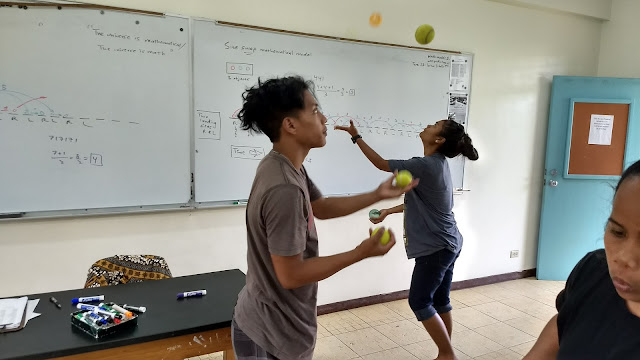 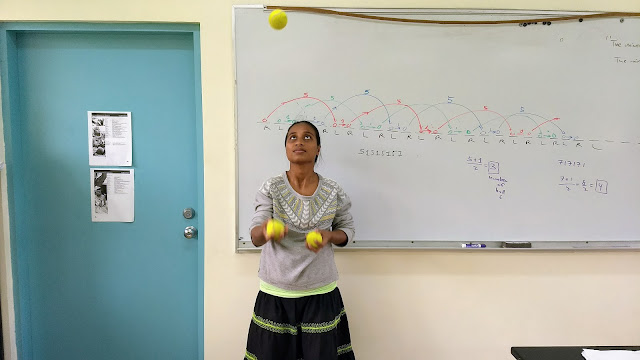 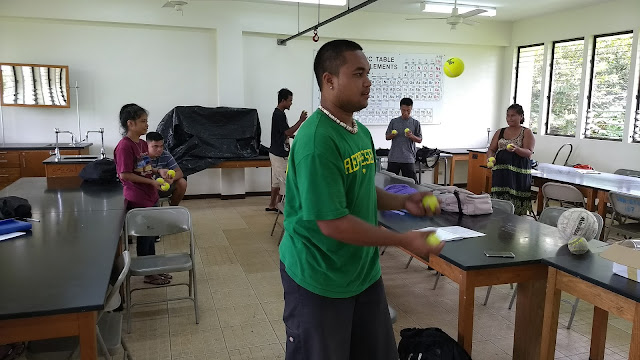 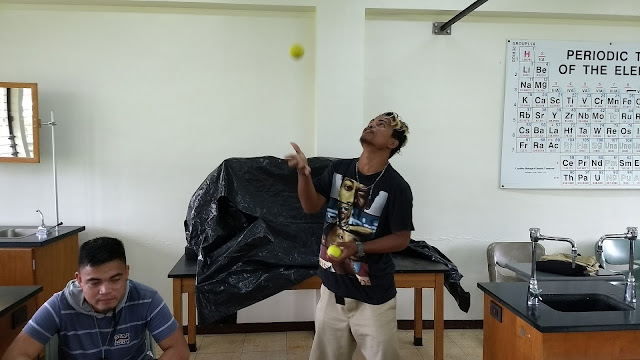 Phillip. John on the left. 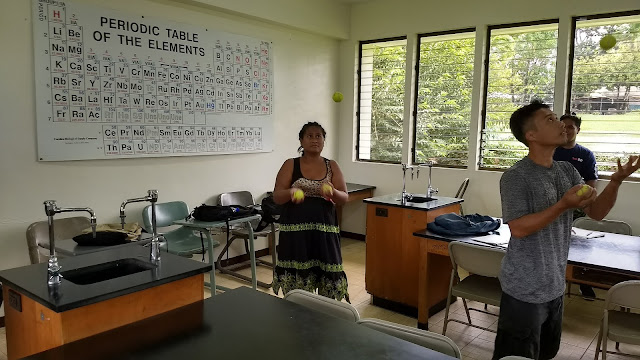 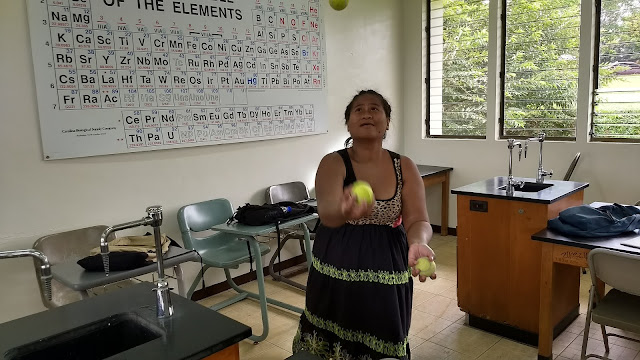 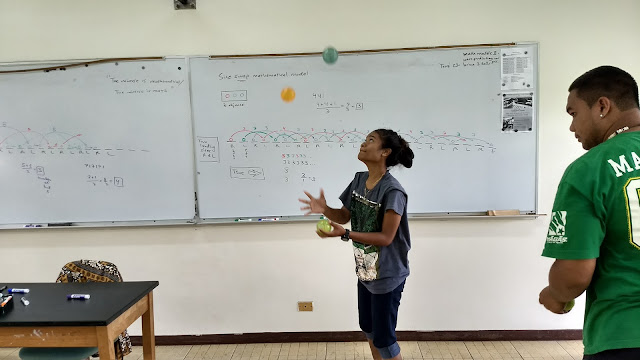 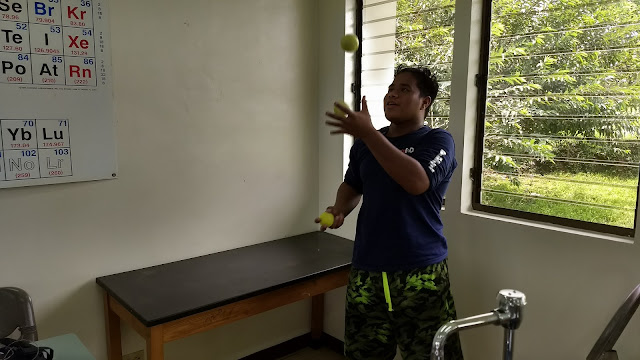 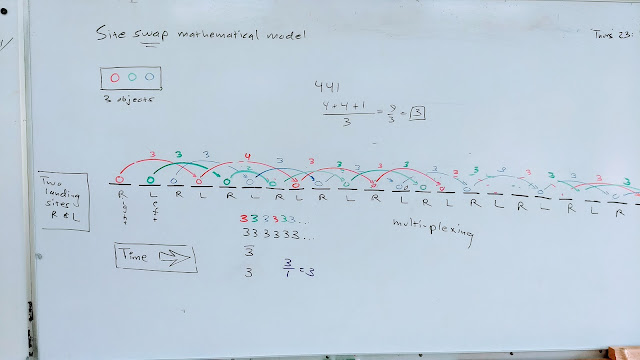 3 with 342 swap midstream
I setup the site swap laboratory without obfuscation other than not spelling out the R and L abbreviations. Labeling was straightforward and direct. The balls were hidden. I used the usual approach of completing the site diagram for a 33333... site swap. Then I asked students if they understood, including individual call outs. Many responded by nodding their heads in agreement. I would then double check with a re-ask of the question - so you do understand this? A couple students were brave enough to venture that they were either confused or not sure they understood. I then suggested that no one actually understood what I had written, and this was all right. What was on the board could not possible make meaningful sense.

I used this as a science methods teachable moment to address the teacher education program students. Students, at least here, will often respond to "Do you understand?" with "Yes" regardless of whether they understand or not. Asking specific questions of specific students may be a useful alternative elsewhere to probe for actual understanding, but here that would risk embarrassing the student. Education in the home here does not involve checks for understanding but rather the expectation of see and then flawlessly reproduce a specific skill. Demonstrate and then faithfully copy.

I then showed what the diagram meant using a red, green, and blue ball. 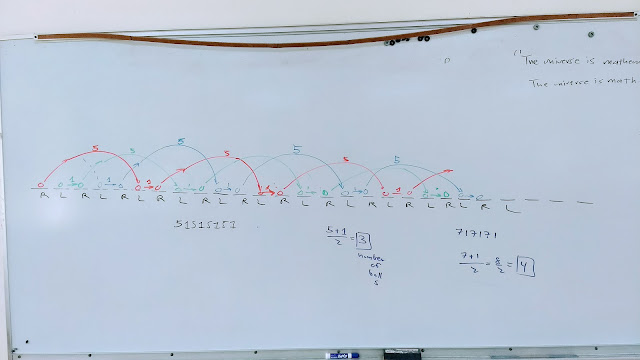 After I juggled 3 I laid out 51 as a theoretical possibility, and then I juggled that. Predicted possible and confirmed. Finally I  returned to the 3 diagram to show the 342 swap. This too I confirmed. I mentioned a 441 as being predicted to work and tested by others, but that I could not myself execute the 441. I told the students that the math in videos we were seeing was also beyond me, but that I could accept the results in the same way I accept that a 441 exists. 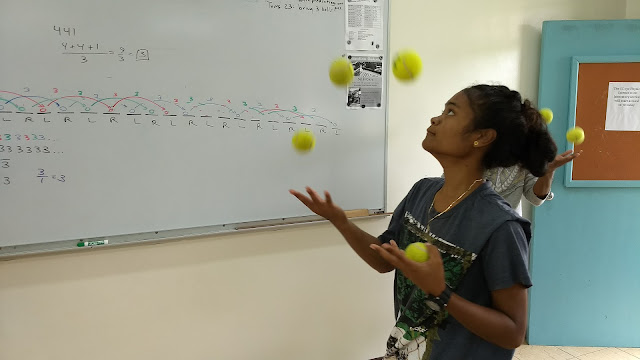 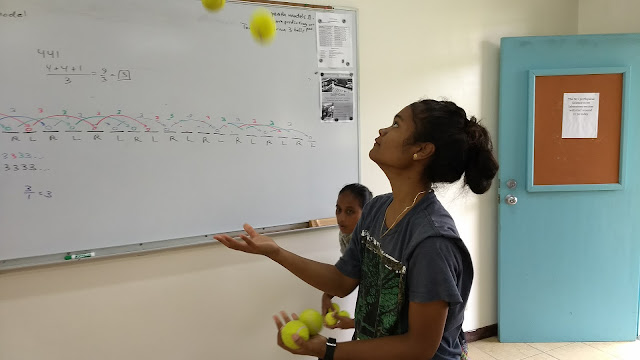 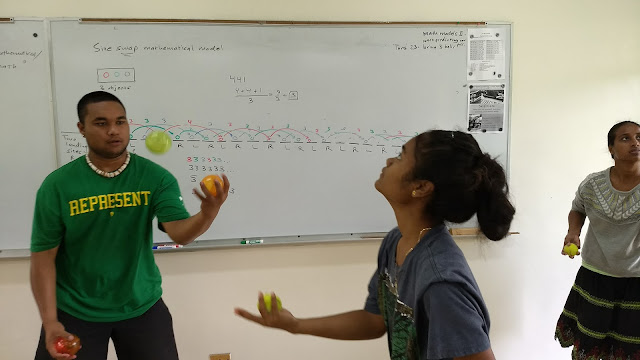 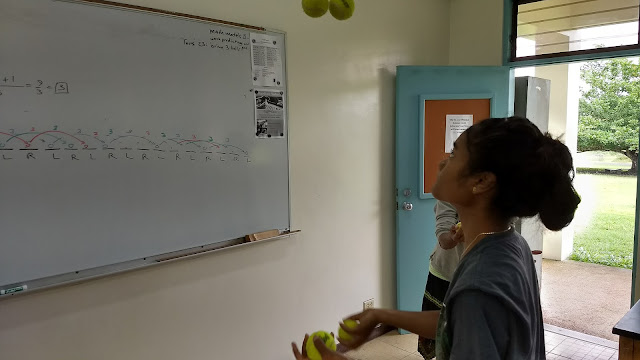 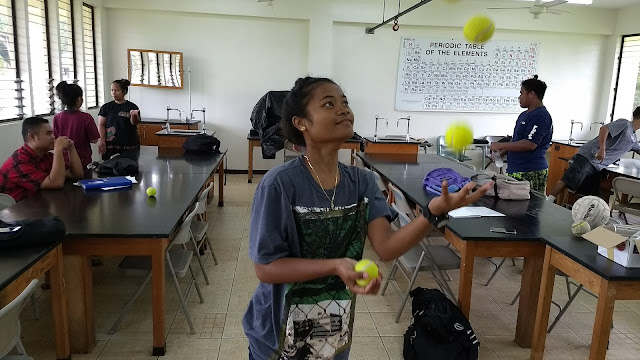 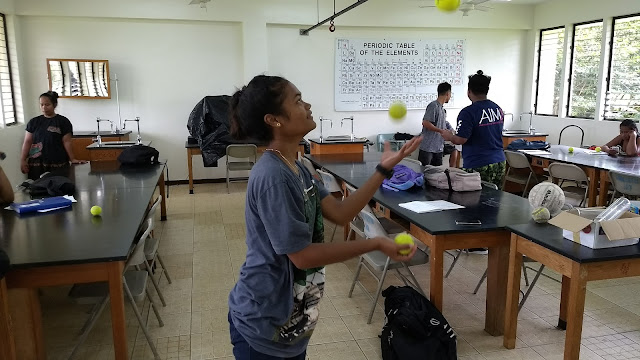 We wrapped with the class attempting to juggle a 3 or 51 pattern. What might surprise a visitor to the class is that many of the students learn to juggle from the get go there in class, with little more instruction than the demonstration. Over the years I have come to understand that the students watch and then, for the most part, faithfully replicate my action. Some students do bring precursor skills, but some simply learn from scratch. And rather than the usual one ball, two ball, three ball recommended learning sequence, some simply start from three and mimic my motions successfully. The first attempt might be a flash (a single three throw set), but by period end they have gone beyond the flash.
physci