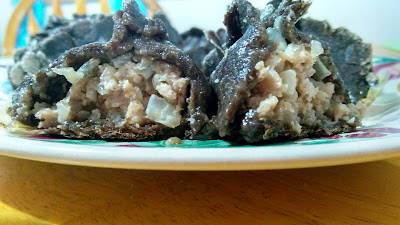 With thanks to Emihner Johnson of the Island Food Community of Pohnpei, I had the rare and distinct privilege to be the first person on the planet to produce jiaozi potstickers with a gluten free flour from an unusual local variety of banana, iemwahn bananas. That's right. Banana flour. Flour made from dried, ground green bananas with the skin. I did not even know that could be done! Bananas. Not rice or the many other perhaps more mainstream flour substitutes.

Two weeks ago I made Artocarpus altilis breadfruit flour pancakes which is a more broadly available flour. 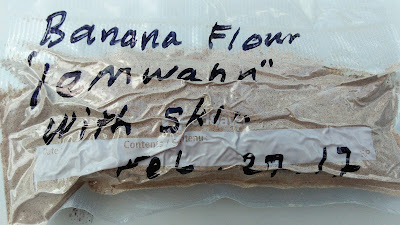 I had less than a cup of this unusual flour to work with, and no guidance on wetting properties, dough elasticity, or appropriate water ratios. This would be cooking's equivalent to flying by the seat of one's pants. For my age group, this is as exciting a Saturday night adventure as one can get. 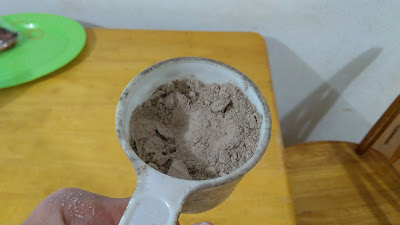 The flour was a brownish color, and the flour had formed into a cohesive lump that easily broke back up into powder. I added a pinch of salt to the flour. Literally a pinch. 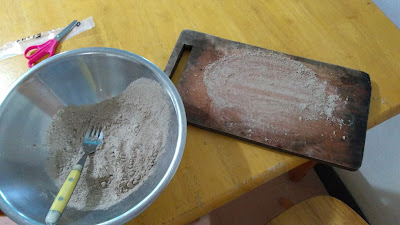 Potsticker flour is made with hot water. 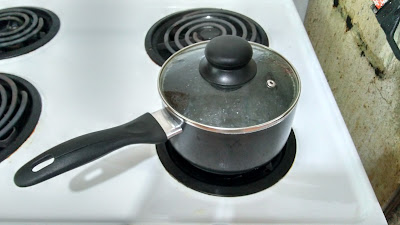 Knowing I was working with less than a cup of flour, and no spare, I added a quarter cup of boiled hot water. 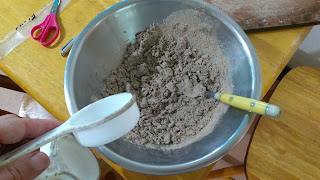 After mixing, I decided I needed a small additional dash of hot water. 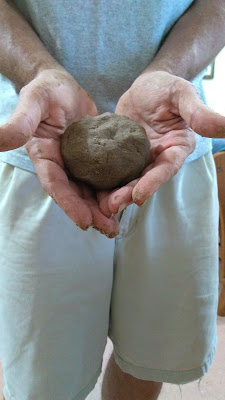 I wound up with a mass of dough I could need into a nicely elastic ball. I was quite pleased with the elasticity of the dough. Many gluten free flours need additives such as xanthan gum to provide that stickiness one obtains with wheat gluten. The banana flour needed no such additives. 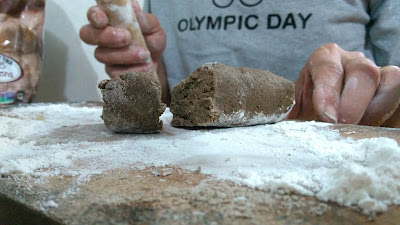 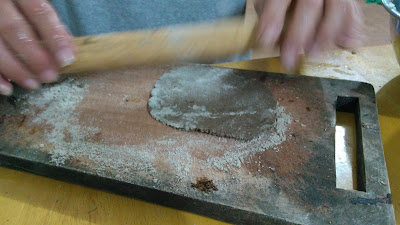 The dough rolled out beautifully, with far less edge cracking than I have seen with other gluten free flours. 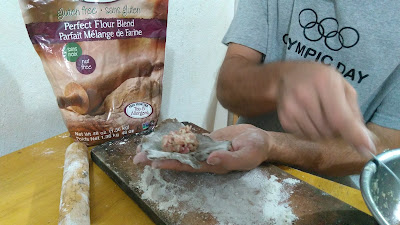 Because I opted to use all of the limited iemwahn banana flour in the dough, I used to Namaste gluten free flour to roll out the potstickers. 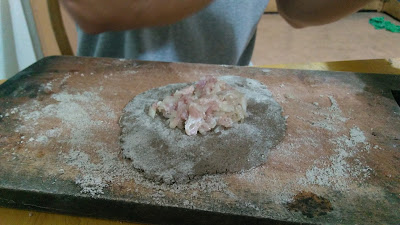 The filling is ground pork with onions and garlic. I kept the filling simple in part to leave open the possibility of tasting the banana flour flavor impact. I used a little miniature food processor to produce a very fine puree of onion and garlic. 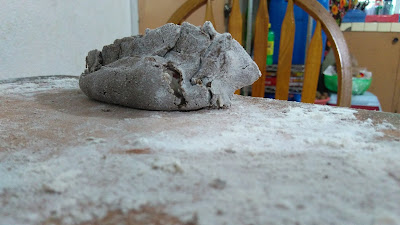 In general the jiaozi formed very nicely, although some cracking developed. Even with wheat flour I tend to make a very thick walled potsticker. A friend from Qingdao charitably suggested that my potstickers were perhaps evocative of a northern style of jiaozi. Then they suggested that I might want to explore using commercially made wrappers. 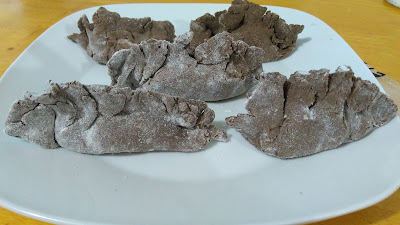 My potstickers are not pretty and I have not made potstickers in a very long time. So long a time that the seven year old in the house does not remember having ever eaten potstickers. Shame on me. And that long lay off shows in my lack of forming skill. 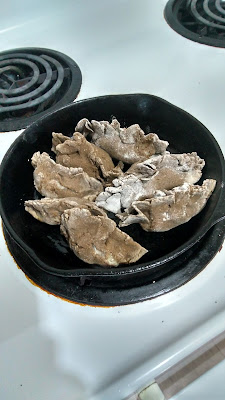 That's the whole batch of potstickers. One shot. One chance to figure out the cooking times. I opted for five minutes in the bottom-browning stage. The stove is at 50% power, medium heat. The potstickers fry in a very thin layer of oil for five minutes. With wheat flour this gives the bottom that golden brown color. 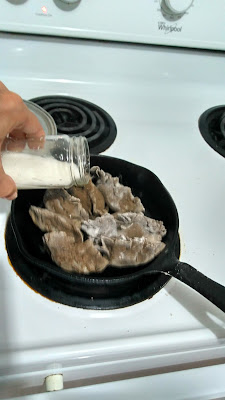 Then about a quarter to a third of a cup of water with a heaping teaspoon of corn starch already in the water goes into the hot skillet. This should go boom if all goes well. Not a boom explosion, but the crackle and sizzle of water dousing the thin layer of oil. Too much oil in the pan and one can have some real excitement - flaming vaporized oil. Did that once many decades ago on a gas stove. Best potstickers I ever made.

Cover the skillet immediately. I use cast iron as a cast iron skillet does not drop in temperature at this point. Aluminum pans have no heat capacity and the water will drop the temperature. With the cover on, the steam cooks the dough. Back off on the heat, bring the stove top down to low. You want to retain boiling temperature, but not burn the jiaozi. 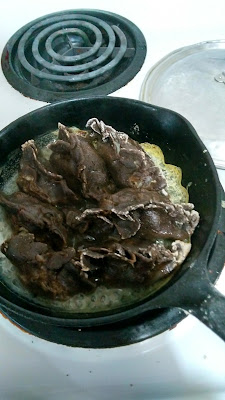 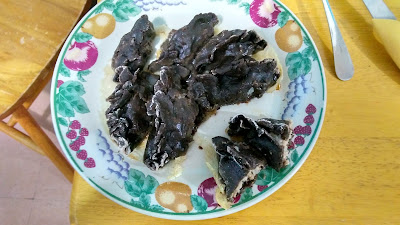 Once cooked, the iemwahn flour is quite dark. Gleaming black to the naked eye. The white touches may be remnants of the brown rice flour used in the rolling process.

Cut in half, the iemwahn flour potsticker is an exotic dish. 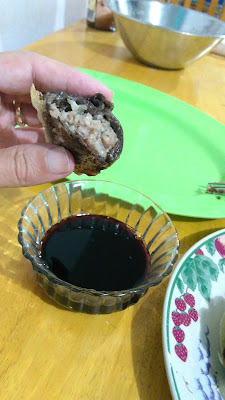 The potstickers were eaten plain and dipped in soy sauce. All flours have their own subtle flavors, iemwahn included. That said, the flavor was subtle, different, and not unpleasant. 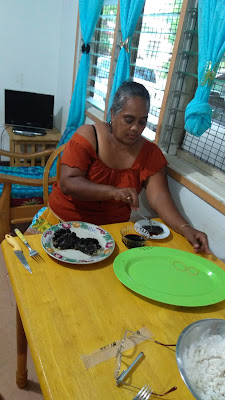 As part of feedback to the Island Food Community of Pohnpei, I would note that no one experienced any itchiness or allergic reaction to this experimental flour.

After having made the potstickers I learned that banana flour occupies a niche in the gluten free food world and may be popular among paleo food plan consumers. I will still stand by my contention that the jiaozi tonight were a world first from iemwahn bananas.

My thanks again to Emihner Johnson and her team at Island Food for a chance to chart uncharted culinary waters.
ethnobotany