Beginnings in ethnobotany including fern walk

January 20, 2017
The term opened with the Internet dysfunctional at best. I dropped the usual term start of moving upstairs to A204 to log students into Schoology and opted instead to use a nice sunny afternoon to go for a walk and talk that meandered down to the Clerodendrum inerme, Ocimum tenuiflorum, and Scaevola taccada.

Day two I dropped the class start machete safety videos, again, due to loss of the Internet. I asked the class to meet at the agriculture area. This provided extra time for plant identification. 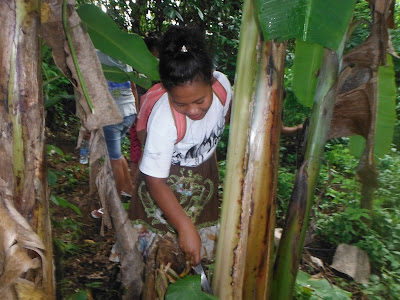 Day three the class met southeast of the gym. I gave a tour of the ethnogarden and the Haruki cemetery. Then the class did some clean-up on the ethnogarden side. The meeting in the field on days two and three provided more field time. Each day I handed out lists of plants. The ethnobotany final was handed out day one. The Latin key plant list was handed out day three with invasives listed on the back. The monilophyte and lycophyte flora in the text was copied to LibreOffice for reformatting to a single double sided and handed out day four for the fern walk. 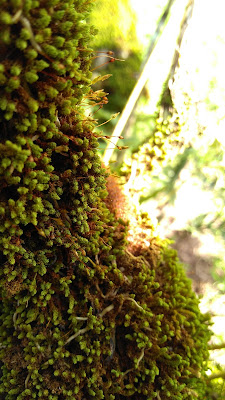 With the FujiFilm XP100 slowly dying, I decided to shoot images on the primitive plant hike using my Motorola Moto G4 Play. The shot above is from the lead plant from the walk: moss. On enlargement one can see the spore capsules and operculum. 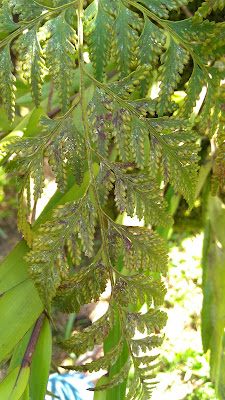 Davillia solida with sori on the east side of the campus. I covered mosses and D. solida at the start, delaying departure to 15:35. 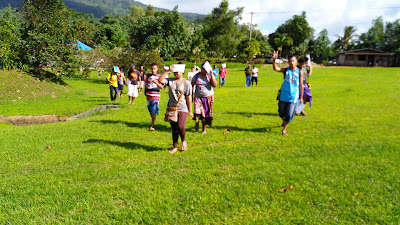 The class then had a long hike across campus. The sun had withered the Nostoc, so I dropped Nostoc this term. Upon reaching the southwestern ridge top, I could not locate any Lycopodiella cernua. None. There were signs that L. cernua had been recently harvested. This means that I now know of only two plants on campus. I am opting not to show the class L. cernua this term. The class did see Dicranopteris linearis. 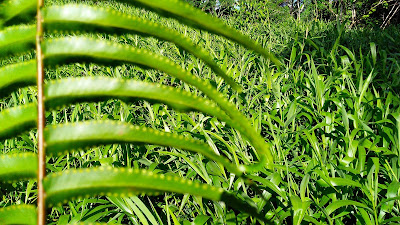 Along the way into the forest I found a nicely fertile Nephrolepis frond. 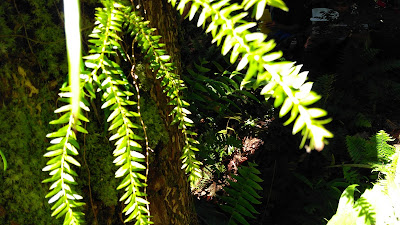 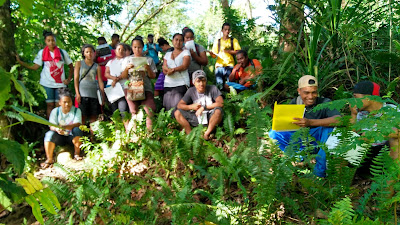 The class at the top of the ravine. Up here I covered Microsorum scolopendria and the meaning of a mwarmwar, also the meaning for Asplenium nidus. 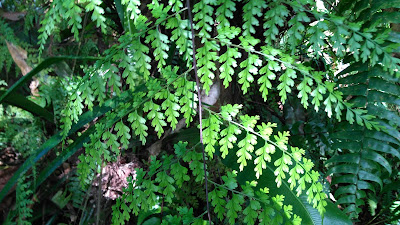 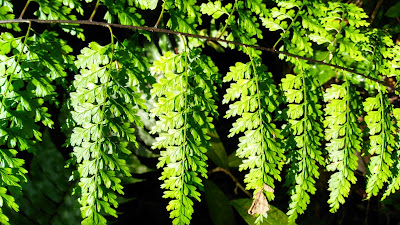 Another image of A. laserpitiifolium 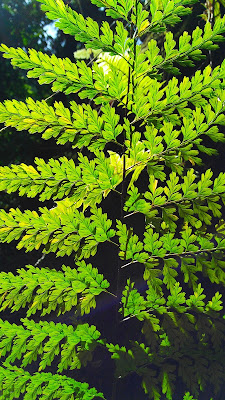 A third of A. laserpittifolium. No local name yet known. 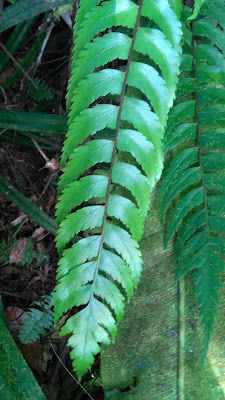 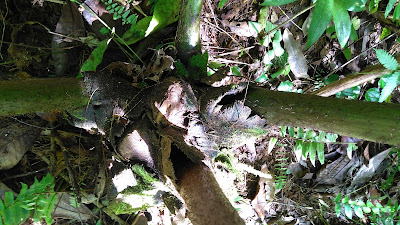 Angiopteris evecta, peiwed, poaiwed. This plant is atop the slope off to the left of the trail. Being here removes the need to go down to the river. There is also Antrophyum reticulatum and Huperzia phlegmaria back around to the circling left on top of the hill. Perhaps the hike should circle back along the forest edge and then back up towards the gym via the Japanese trench spur. 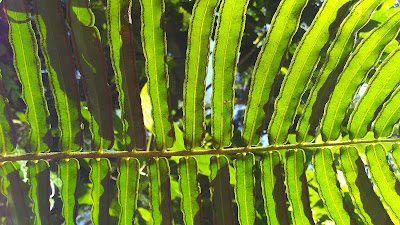 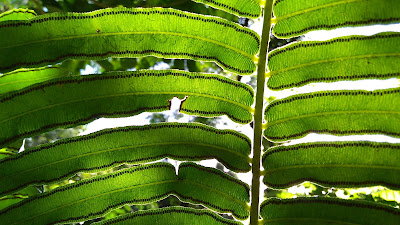 Another shot of the sori on A. evecta. 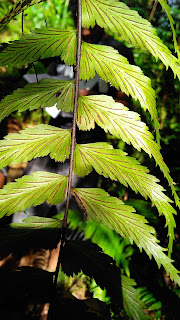 Down slope a short ways, fertile frond on Mahrekenleng. 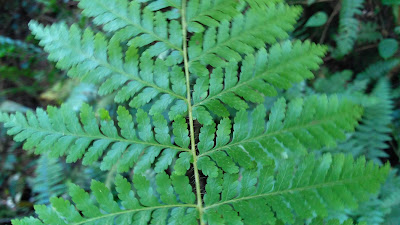 Fern not yet positively known to me. Perhaps peipei eni? 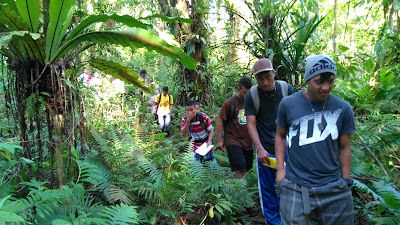 Asplenium nidus on the left. Cyclosorus maemonensis on the forest floor. 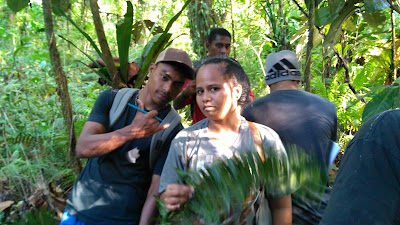 Posing in the forest, a nice specimen of Asplenium nidus in the background. Down here I covered the issue of command and control in a nahs, the quite nature of the ancient kamadipw, and the spiritual nature of the forest. Down here there is only the sound of the water, the birds, the forest. 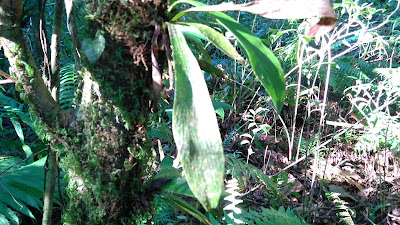 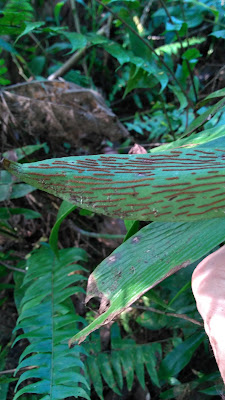 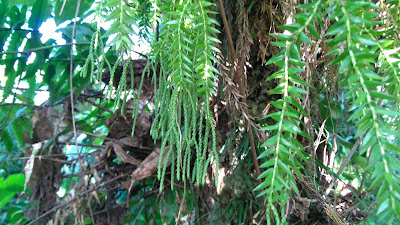 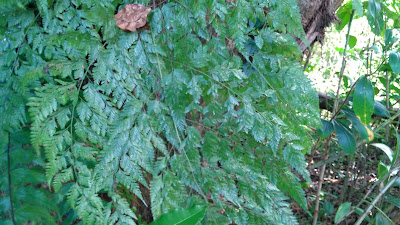 Another fern yet to be positively identified by me. 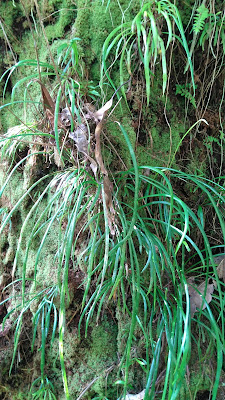 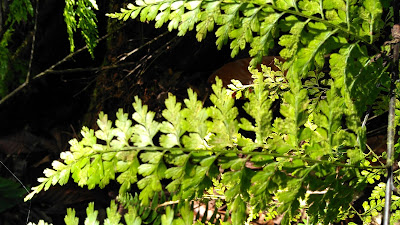 Another A. laserpitiifolium with the sun behind the frond. The hike was unusual for the dry sunny weather.

Starting the term without the first couple days in a computer laboratory is a more appropriate start to this outdoor oriented class. This does delay Schoology login and requires maintaining a manual paper trail further into the term. The result, however, is more time in the field and a start that centers on plants and the out of doors.
ethnobotany