September 13, 2016
Although Chromebooks exist on Pohnpei, and some local schools and youth groups have experimented with Chromebooks, the gear for employees at the college is primarily Microsoft Windows and secondarily Apple OSX systems. With recent advances in the statistics capabilities of Google Sheets, I had become interested in exploring the use of Chrome OS on a Chromebook on campus. Chromebooks might provide a more cost effective way to get lap tops into the hands of students. Chromebooks could also conceivably be an option for those members of faculty and staff who only need an office suite and who do not use customized, proprietary software packages.

As I anticipated, the first launch behaved as an Android cell phone does, the Chromebook required an Internet connection to use a Google sign in to log onto the machine. There is no way to boot the net centric Chromebook without Internet connectivity, not at least as far as I could tell. 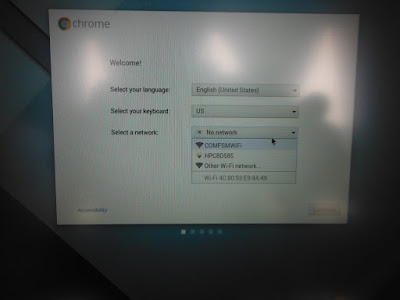 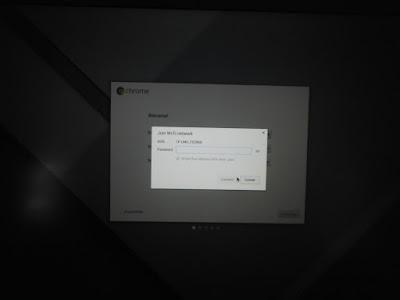 The solution was to bring the Chromebook to the house and use the home WiFi. The Chromebook automatically asked for the WiFi PIN number on a WPA/WPA2 encrypted router. Thus this would appear to be the first hurdle to broader use of Chromebooks purchased by our students at the bookstore for use on campus: first boot would require access to an open network or one using WPA encryption and a PIN for access.


Login then proceeds in a fashion that for an Android cell phone user is very straightforward. Enter your Gmail address and password to gain access to the "desktop." There is a provision on the desktop for signing out, and the WiFi connection can be shared among users, thus there appears to be provision for multiple users of the lap top on one lap top.

There was a "More options" choice on the first sign in screen that provides access to a "Create New Account" option for those who do not have a Google sign in.  For schools and businesses that are using Chromebook at school or at work, there is apparently an option to enroll the Chromebook in that organization.

Note the "7:27 left" is run time left on the battery - depending on activity and power consumption choices the fanless Acer Chromebook 14 can run up to 12 hours on a single charge. Although fanless, the laptop appears to generate almost no thermal signature, even when placed on one's lap.

One of the invisible pluses for those who live in Googleverse is the seamless feel to working on the Chromebook in Google properties. Thus dragging and dropping from my camera directly into this blog, or capturing and control-v pasting a screenshot into the blog, occur smoothly. Control-shift switch window provides the same quick screen region grab found with shift-print screen on Ubuntu and the command-shift-4 combination on OSX.


There is a pseudo-dock like feature, or task bar, and items can be added to this. The black "S" was "downloaded" from the Chrome OS store, but is functionally only an Internet shortcut to the Learning Management System Schoology. That said, this is useful to a daily user such as myself.

As with any UI there is a learning curve, but for Android users perhaps the curve is just to use the touch pad like a screen. The pad recognizes double finger scrolls but not pinch zoom. The pad doubles as a mouse button, with the Alt key used to access the "right" mouse button.

Perhaps the nicest feature for a keyboard addict is the on screen meta-keyboard keyboard. Press Control-alt-? and then press a modifier key (or two) to see all of the shortcuts associated with that key. 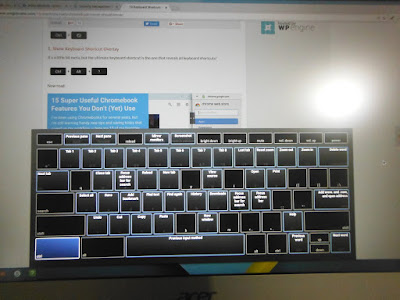 Like a Mac keyboard there are quirks - no delete button. That takes an Alt-backspace on Chrome. And no dedicated caps lock key - the key was replaced by a search button that brings up Google search. Turns out Alt-search enables caps lock, the shift key then releases caps lock. Which actually makes sense: I search using Google more often than I set the cap locks key. More often than not, I inadvertently press caps lock on the iMac keyboard. 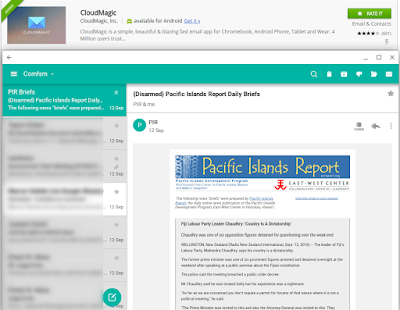 IMAP is being handled by a downloaded third party Android app. The initial download of a first Android app downloads the Android framework for Chrome, thus a download in excess of 100 Mb.

To edit the above image, a search in the Chrome store for the Graphic Image Manipulation Program suggested GIMP on rollApp, but that is payware after a 14 day trial. The second option was Pixelr, an on line ad supported app that appears quite capable. "Installing" the app places a shortcut to the site in the launcher menu.


With all of my classes using on line submission in Schoology, having a web centric worktop makes sense. There will be some edge situations that remain to be tested. Schoology uses a Flash plug-in and an underlying Word-to-PDF converter to display documents. For sufficiently complex Word documents with inserted Excel tables and charts, the converter occasionally has problems. Particularly with charts that display trend lines. Although I am encouraging students to use Google Docs and Sheets, even these are apparently converted to Word and Excel formats as part of the "import" process into Flash-PDF used in Schoology. There are times when I have to download a complex document and view the document in the native program. With no native Word nor Excel this may prove problematic. And the Chromebook is not about local storage, the machine is designed to be cloud centric, always connected.
tech