Finding Binky and learning about latitude and longitude

June 13, 2018
During summer physical science class in Pohnpei I can hide Binky out in the forests or swamps of campus very early in the morning. As in around six in the morning. 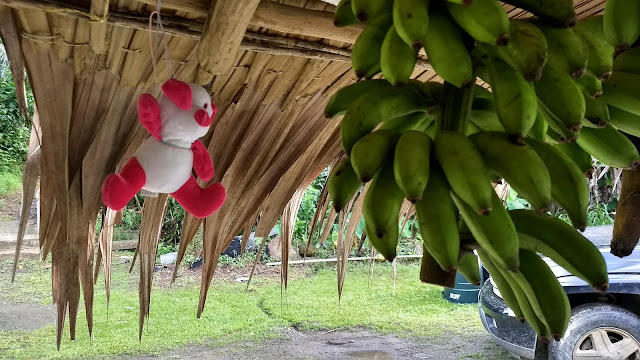 This is not an option in Tofol - I arrive just before eight o'clock in Tofol due to transport limitations. I do not know Tofol well, and access to forests and swamps appears limited. Thus I approached the market across the road and asked permission to secure Binky among the bananas. 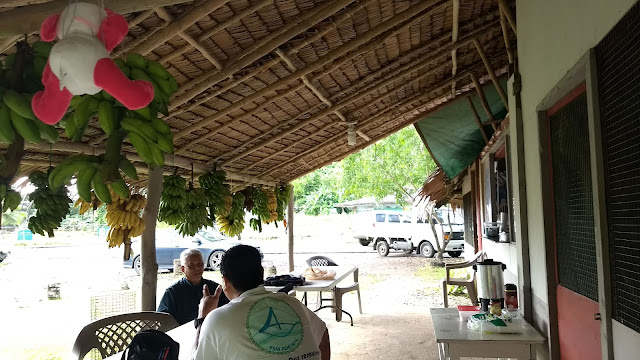 I had carried three global positioning satellite receivers over from Pohnpei to use in today's activities. 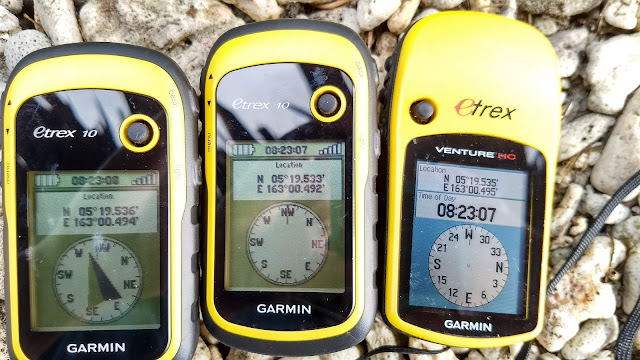 Later that morning I informed the class that Evan's Binky was missing. I intentionally omitted what Binky was, and no one asked. I did note that Binky might be Pinky, but nothing more than that. 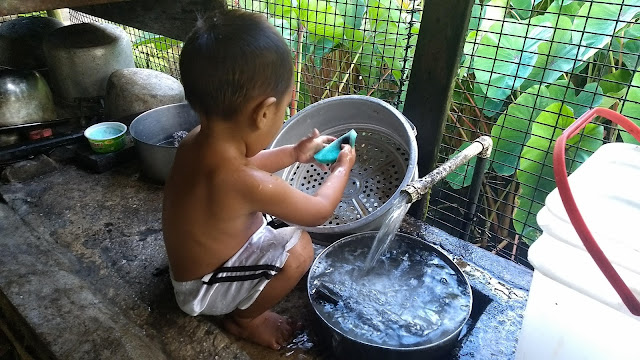 Evan at his day job

As per the discovery learning method used for the finding Binky exercise, I did nothing more than to write the coordinates of Binky on the board, take the class outside, turn on the GPS units, and tell the students that when both numbers - north and east - matched the values on the board, they would find Evan's Binky. 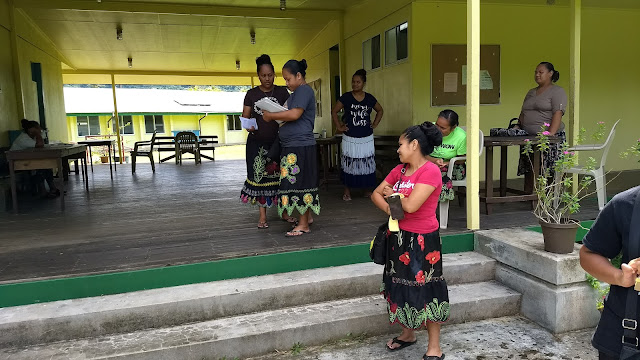 Initially, the class hovered around the campus building, looking for Binky on the porch or in shady spots along the front of the building. 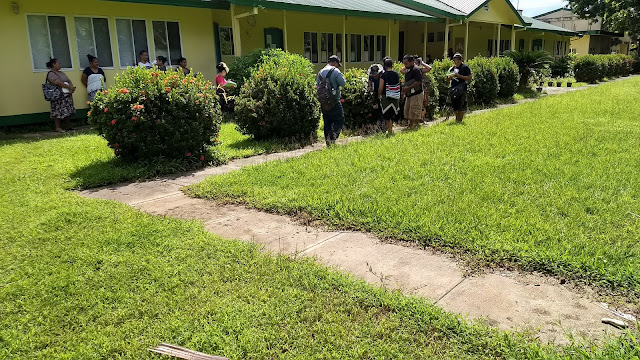 Some groups would remain near the building, convinced Binky must be somewhere in or around the campus building. Perhaps hidden in the bushes. 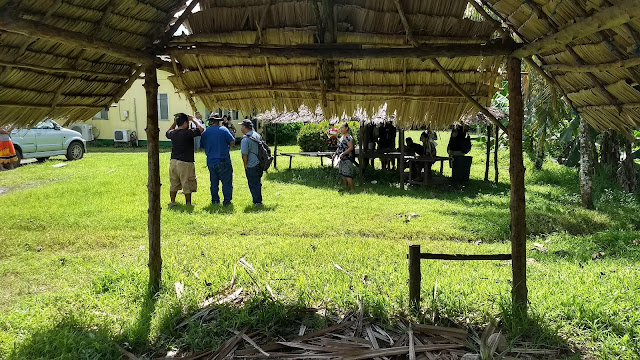 A few students gingerly pushed west away from the campus building. This improved their east value, but they appear to become concerned that they were going the wrong way when this made their north value shift away from the correct value - back at the campus the north value was correct. The students were reticent to give up that one correct value while chasing down the more significantly different east value. Binky was effectively due west of campus, so the north value was easy to stumble onto. 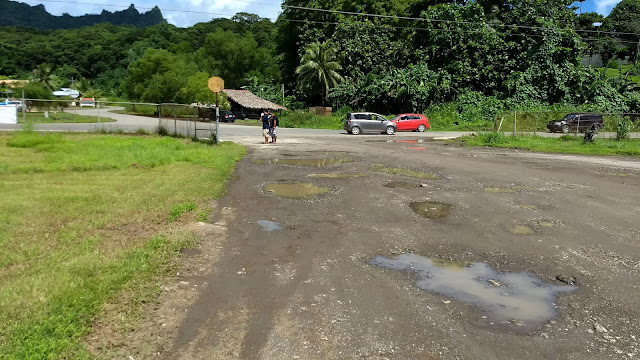 I repeatedly told the students, "Trust your equipment. Follow the numbers." After more than a half an hour wandering close to the campus building, one intrepid group began seriously chasing the east number. The loss of the north value clearly bothered them as they repeatedly sidetracked to the south to regain the north number, but the east number would then drive them again to the west. 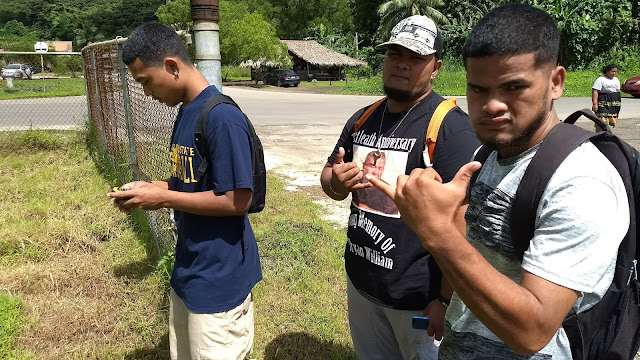 The group lingered at the edge of the property, starting to have doubts as the numbers were about to drive them off campus. Once they crossed the main road, however, the north number came back to the correct value. Now the realization landed: Binky was off campus. From there they moved without hesitation due west, arriving at Binky's coordinates. 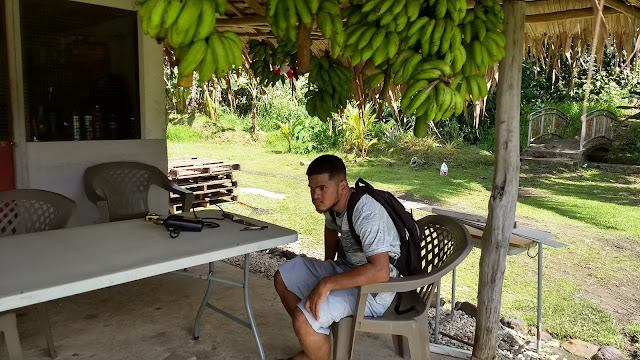 With their numbers in agreement, they did not see Binky. Binky is just visible above Arthy Fred's head. The group wandered around, but when they left this area their numbers no longer agreed. The group was, for a time, flummoxed. They thought the black SUV parked there might be Binky, but I pointed out that Evan could not possibly own a black SUV.

The group received reinforcement of their position when Zakias came up the road following his GPS. Zakias had the east number, but not the north number, as he came up past the Kosrae Historic Preservation Office. 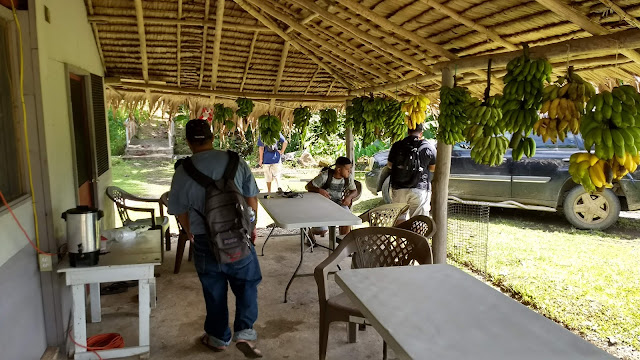 Edward would be the one to see Binky in this moment, as he walked towards the hospital. He suddenly saw what had to be and what was Binky. The group went from appearing defeated to savoring victory. 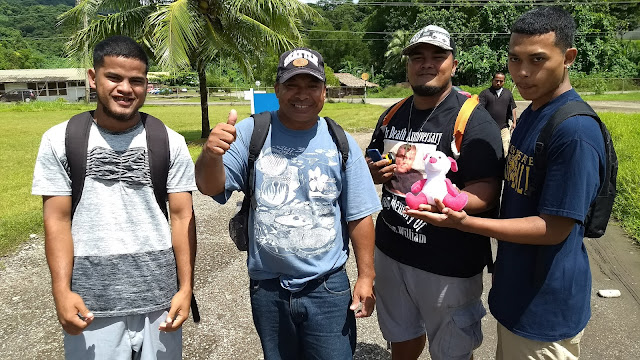 Back at the campus the rest of the class had given up and taken to sitting in the shade. The exercise with Binky led directly to the question of just how close the GPS could put one to Binky. Exactly how close is 0.001 arcminutes to a particular location? And that led into laboratory seven - finding the conversion factor between arcminutes and meters. 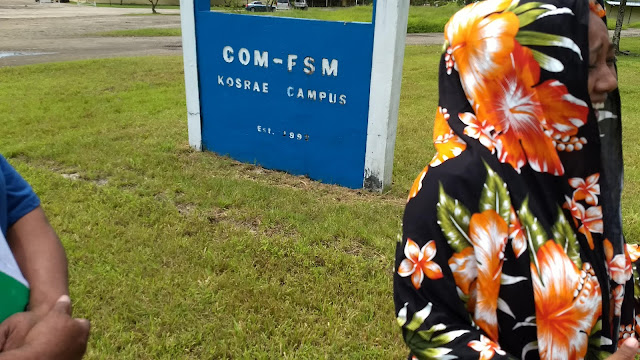 I realized that the class could run east, much as I do on Pohnpei, from the campus sign back across the front of the building. There are, however, bog holes hidden in tall grass that I did not know about. As I had volunteered to push through the tall grass solo, I was the only one who went into a bog hole. 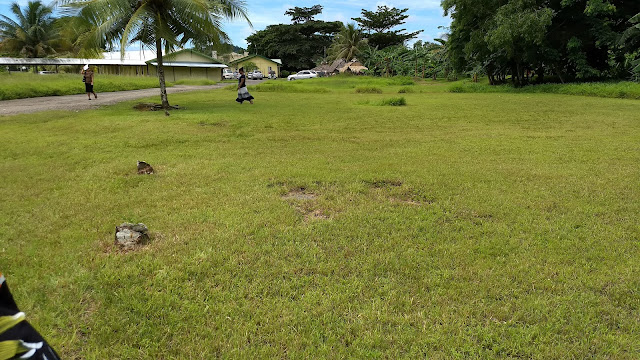 The view looking east from the start of the measurement line. The taller grass hides bog holes. 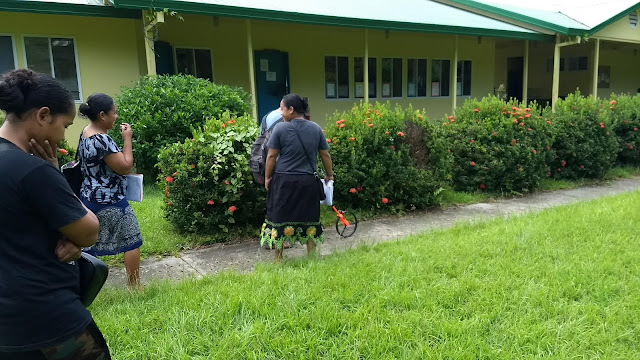 The line brought the students along the sidewalk which bears only slightly north of east. The surveyor's wheel is being used to measure the distance in meters. The GPS units provide data on the distance in arcminutes. 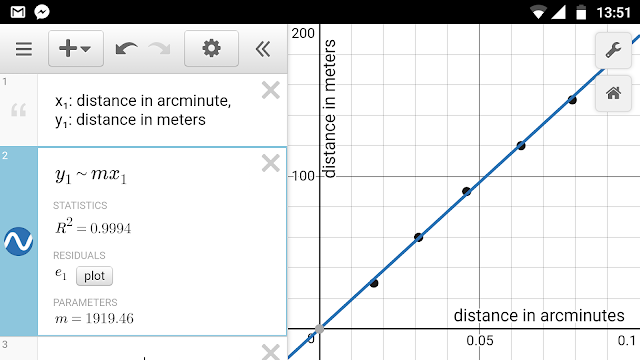 Analysis of the meters per arcminute data in Desmos

Theoretically here at Kosrae the length of arcminute along a line of latitude (an arcminute of longitude) in meters is around 1847 meters, which puts the experimental value at within 4% of the theoretic value.

My thanks to the market for permitting me to hide Binky there!