June 19, 2018
Weather and climate was compressed into a single day this summer. I began with a playlist that leads off with cloud types, moves into precipitation, and wraps up with El Niño and La Niña. The online streaming playlist stalled during the precipitation video, so I switched to a previously downloaded duplicate. That download proved to be corrupted and could only play the first couple of minutes. I switched back to the online playlist and then went around the computer laboratory ensuring that no one was running anything in the background - FaceBook, YouTube, or other sites. I found that if I can keep everyone in the lab offline, YouTube is marginally functional.

After the break I continued with the climate change playlist. This continued to work as long as I monitored the students and ensured that no one else in the computer laboratory was engaged in Internet activity. By mid to late afternoon, however, latency exceeds the wait times of modern browsers and everything starts to time out.

I then did a lecture-demonstration of calculating the relative humidity and heat index from a wet and dry bulb calculation. I also shared links to local weather information including the PTSA Kosrae METAR reports and the Windy.com METAR, TAF, and Meteogram report for Kosrae. This was followed by laboratory eight observing and recording clouds via drawing. Laboratory eight focuses on observation and recording in a scientifically accurate manner what is seen. Science has many fields that focus on careful observation and labeling. The ability to observe and accurately record observations are valuable scientific skills. Science has long depended on accurate and careful drawings of objects and phenomenon. This laboratory focuses on observation of clouds and attempting to accurately depict a cloud.

Secondarily, this laboratory provides a science activity that would be appropriate in the lower grade levels. The majority of my students are education majors, drawing accurately is a starting place in science. I also shared the art rubric I have used to mark drawings in the past.

Art supplies are limited on Kosrae. Kosrae campus does not have petty cash authority, and in any case crayons would be a tough buy to justify on a one off basis, so I bought the crayons. 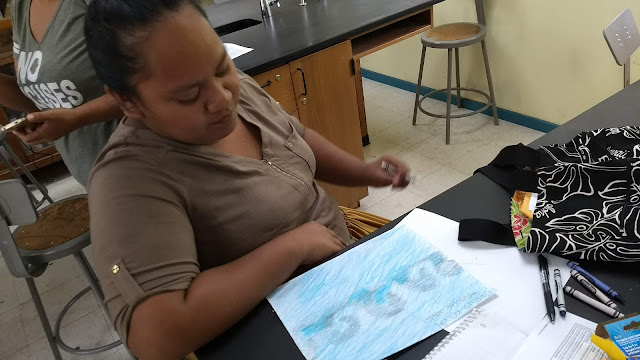