July 01, 2017
Summer is three laboratories a week. Week five starts in optics and ends in acids and bases. 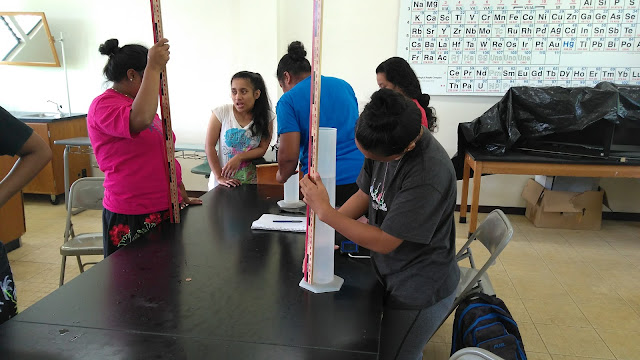 Measurements of the apparent depth of a penny provide non-trigonometric access to the index of refraction for water. This is useful in a class that intentionally has no math pre-requisite and, in general, services non-science, non-math majors. 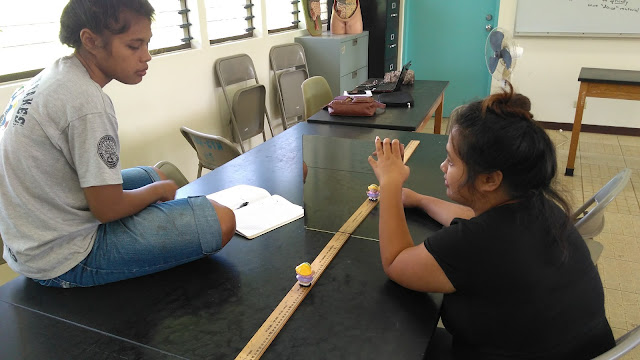 Iva Nicole and Mayleen work on the relationship between the distance of an object from a mirror and the apparent distance of the image behind the plane mirror. This is a simple linear relationship, but this is the mathematical approach baked into the course: Study a single linear equation each and every week until linear relationships become second nature. This is, by design, the educational opposite to "Do problems one to forty, even numbers only." The class uses data and Desmos to generate direct relationships. 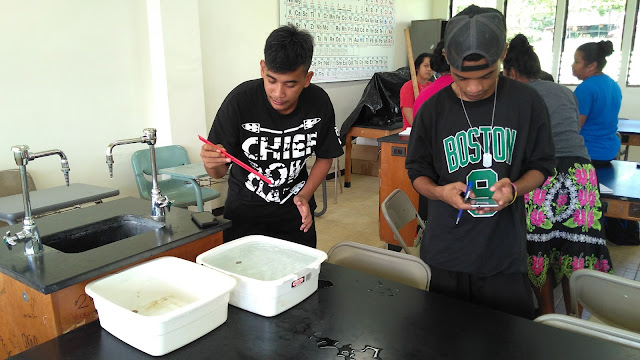 Jayme makes measurements, Shamrock is directly entering the data in Desmos on his smartphone. 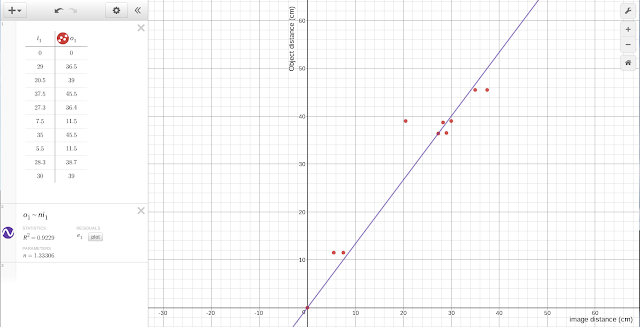 Although single data points may have significant error, over a number of measurements the results can be surprisingly accurate. 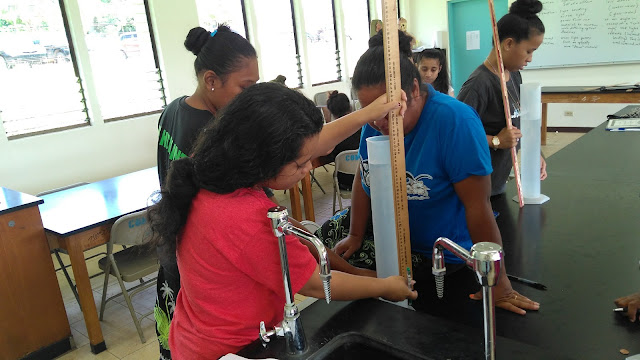 Results from in class data were almost suspiciously accurate. Results vary term-to-term, but taken in aggregate, the results are usually quite close to the index of refraction for water. This laboratory is again a fairly simple, low equipment requirements laboratory. The use of a linear regression reinforces the connection to basic algebra.

For laboratory thirteen in which floral solutions are used as litmus indicators, I opted to bring in flowers from home that I knew were likely to work. I also gathered Hibiscus tiliaceus at 11:20, by which time the flowers are functional as a floral litmus solution. Gathered at 8:00, the flowers do not usually work as well. I also brought in Spathoglottis plicata, which worked well on the day of the laboratory, and Hibiscus rosa-sinensis, which did not work as well. 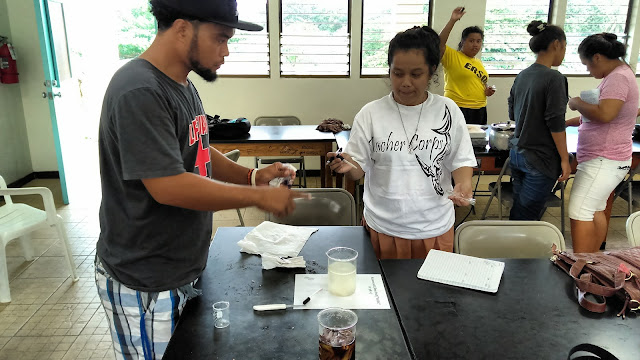 Percy and Lillibeth determine what color changes a known acid (key lime fruit) and a known base (baking soda) would cause.

The flowers are boiled and the resulting tea is used as a floral litmus indicator. Key lime fruit is diluted with water for the known acid. 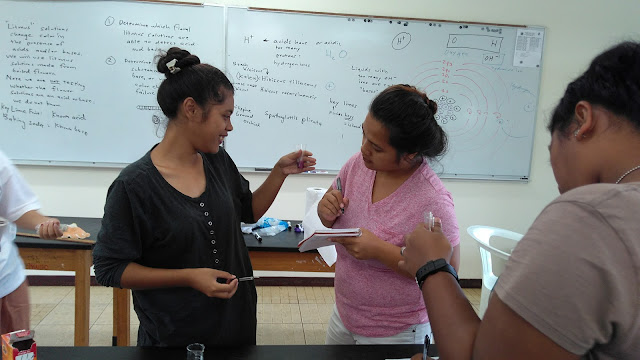 Iva Nicole and Mayleen look for color change as the result of adding key lime fruit. 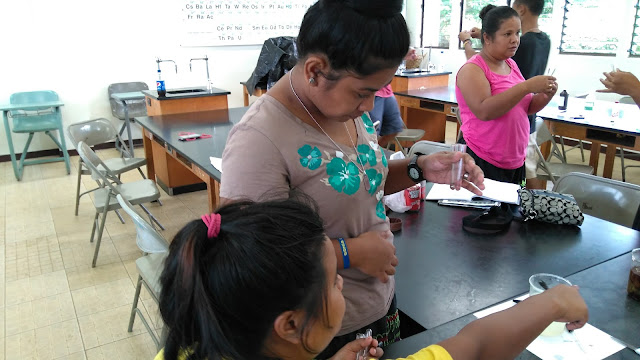 Genrisa holds two test tubes as she and Siorine work out whether the unknown liquids are acidic, basic, or neutral. 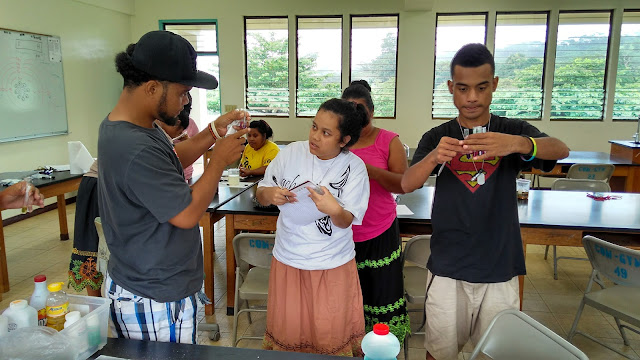 Percy, Lillibeth, and Shamrock working on the unknowns including ammonia. 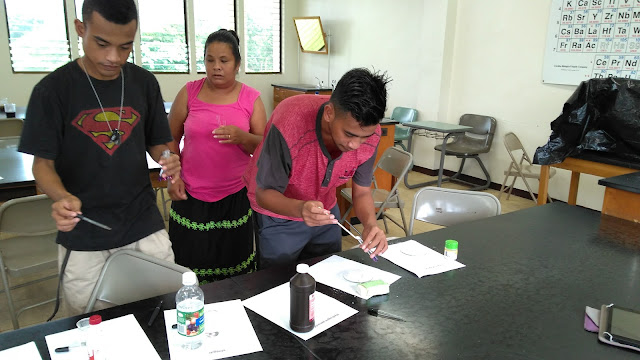 Shamrock, Ronda, and Jayme working with diluted bleach, vinegar, hydrogen peroxide, a bar of hand soap (shavings), and cream of tartar. Hydrogen peroxide is typically too weak to indicate. 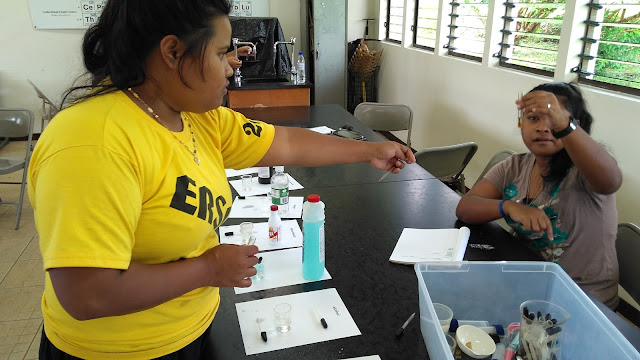