February 07, 2017
After four and half years, the Ohava Ubuntu rig that powers work at home suffered a video system failure. Although the other systems gave evidence of being functional, Ohava has since ceased to exist and trouble shooting a built-in video system was far beyond my skills and tools.

The next replacement for running in full tropical saturating humidity, in a shared air space with a kitchen and fried food, is an LG Chromebase 22CV241 running on an Intel Celeron 2955U at 1.4 GHz with 2 GB DDR3L SDRAM, a 16 GB solid-state drive, 22-inch screen, wireless LAN 802.11a/b/g/n, Bluetooth Combo, LAN: 10/100/1000 via ethernet cable, built in camera and speakers, keyboard and mouse included. The specifications might sound light, but bear in mind that the unit primarily runs Chrome browser and document storage for G Suite is in the Google cloud. 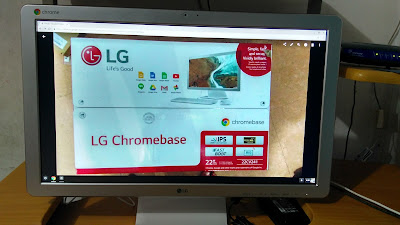 Boot involved an initial update that did not run in the background. Took over an hour for the OS to update from Chrome 46 to 53. Bandwidth is narrow in this house. This was followed by a background update to 55. Having used a ChromeBook lap top for four months, I knew what ChromeOS brings to the table. Beyond the basic set of common cloud apps, I also use text.app, Caret text editor, and an SFTP app for file transfers to a remote server. 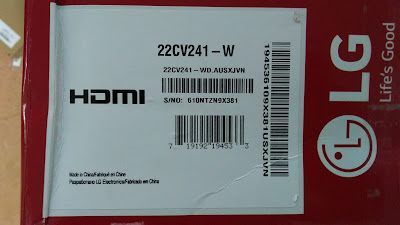 Over the past four months of Chromebook usage I have gradually migrated files from Microsoft OneDrive and Spideroak One to G Suite documents stored in Google Drive. There is risk in this approach.

In the past the risk was loss of a hard drive, a local hardware failure was the source of data vulnerability. With the cloud the risk is potentially a compromised account and loss of control of the account. The cloud side becomes the single point of vulnerability. That said, the ability to start a G Suite Sheets data document in the field on my Motorola Moto G4 Play, walk up to A204 and edit the same file on the 84" SMART board during the same class, share the file to the class, then walk down to my office after class and have the same file available instantly on the iMac, and finally open up the same file at home on my ChromeBook makes my data life easier. No need to remember to save to a cloud drive. No saving files, ever. No flash drives. And the file can be shared to the class via a link. Life in the cloud can be good.

Perhaps the feature that intrigues the most - as a feature I am not accustomed to seeing - is the "Reader" mode option available from selectors on the bottom right chrome of the screen. The description as reading modes that reduce eye strain perhaps leaves out what the reading modes really do. Reading mode one is a akin to the Android app Twilight - a red filter that reduces the blue light emissions from the screen. The blue light emissions may be responsible for altering the brain's diurnal bio clock and contributing to insomnia or delayed onset of sleep for some users. The next build of Windows is slated to have a "night mode" capability, the LG unit has this ability already.

Reader mode two can be best described as being a light grayish sepia tone reminiscent of Amazon Kindle's sepia background option. Both are nice options to have on board, no app required.
tech