February 16, 2017
Week six in physical science is usually measurements of the conduction of heat leading to column or bar charts of start and maximum temperature. Desmos cannot produce column nor bar charts, Given that Desmos can regress to any arbitrary function, I centered a revised heat conductivity laboratory on mathematical models. 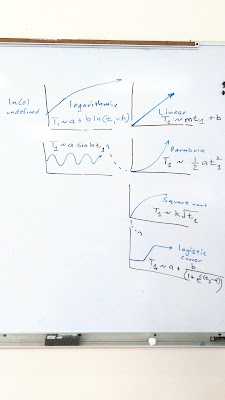 I realized that although potentially confusing for the students, Desmos was case sensitive, allowing the use of t1 for time in minutes and T1 for Temperature in degrees Celsius. I put up a series of mathematical models using these two variables. I had the students gather temperature data every minute and then the students used Desmos to make a decision on the best model for their data. I assisted with those who chose a logistic model. 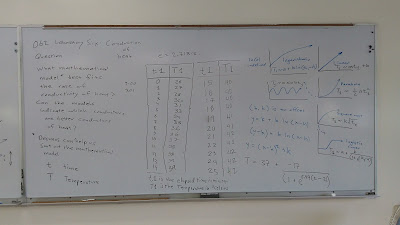 The data gathering did not take long, which permitted more time to sit down with each group and discuss possible models. Note that here the data is being used to drive a model, rather than the theory-drives-the-model approach of the banana leaf marble ramp of week four. This is exploratory data analysis, unbound by theoretic considerations.  I let the groups decide how long to monitor and measure their systems. 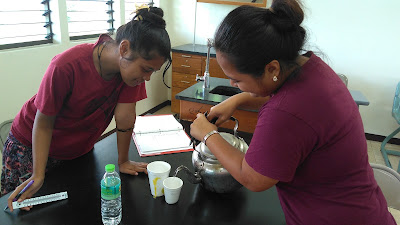 Mayleen adds boiling water to the hot side of the rig, Iva Nicole watches 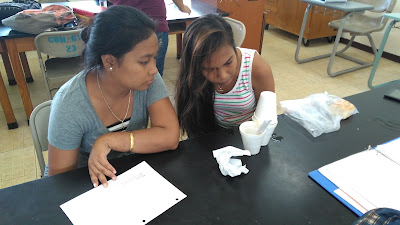 Timing was driven by time.gov running on a Chromebook attached via HDMI to the television at the back of the room. The screen was large enough for students to take temperatures each and every minute. 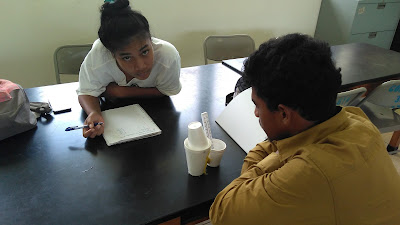 The time versus temperature leads to an xy scattergraph that Desmos can handle. The class did not tackle which conductor conducted the best. The different models in use complicated this effort. 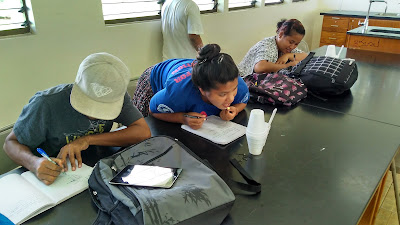 Pelida reads and records the data 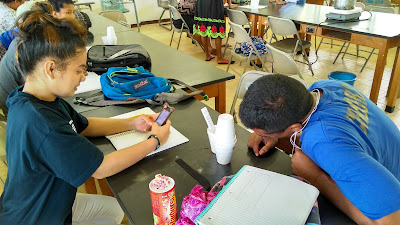 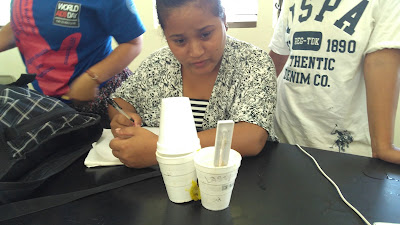 Groups that recorded data for shorter intervals generally found linear data. Groups that recorded data for longer often found their data was best modeled by a logistic curve. The students were unfamiliar with the logistic curve, the laboratory provided an entry point to that particular mathematical model. Models such as the logistic models are often given short shrift in an introductory exponential mathematics course such as an MS 101 Algebra and Trigonometry course. The texts often favor manual manipulations and hand solving of contrived examples. Not infrequently the instructor is unable to explain when the need for that manipulation will ever arise in life (never in an average life!). In this lab the data drives the math, and some of the data drives a logistic curve. Desmos produces a wonderful fit against the regression T1~a+b/(1+e^c(t1-d)).  And there is beauty in mathematics when a curve swoops right through a set of logistic data. 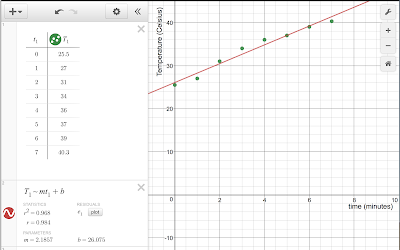 All but one group had access to Desmos technology via either a pad or smart phone.
physci