March 04, 2016
This term I decided to recenter on tile seven to force a peak at a tile row value. This would also then match a Schoology homework assignment. At 8:00 I wound up with a left skew. I also eliminated all round beads due to concern for the impact of rolling. In the past the round beads have rolled upon landing, leading to extreme values. 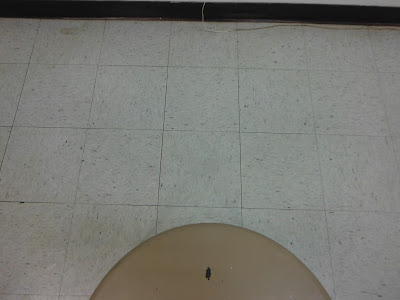 In the past I have used centimeter measures. At one point I measured to the class upper limit, the south side of the tile row. But that ensured a skewed result. Then I used tile midpoints, which worked better. I shifted to throwing on a line, but this term I switched back to throwing from and on row center. The center row is tile row seven, fourteen total rows seem to work well enough. 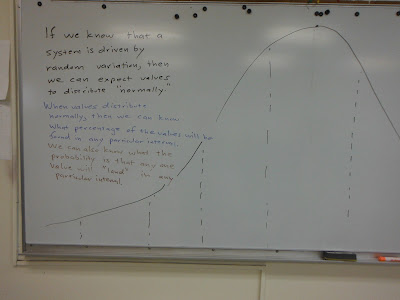 I also further developed the session by pre-writing the material on the upper left onto the board, and pre-guessing the shape I hoped to generate. I expect a normal curve, that is what I normally expect to get. Predicting the future. 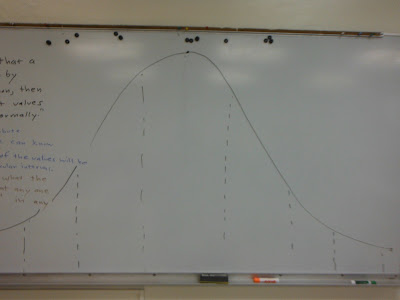 This term I also redeveloped spreadsheet tools to provide numeric support to the visual answers I derive on the board, introducing also - if only very lightly - the idea of the mean as being a first moment and the variance as a second moment. I used modified formulas that differ from my chapter six but make more sense to me intuitively and share a certain symmetry. 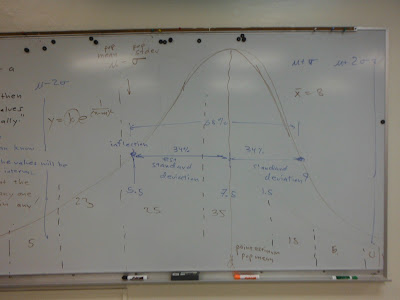 At 8:00 I had significant skew in the distribution. A few bad tosses, forgot the importance of throwing also with my left hand. 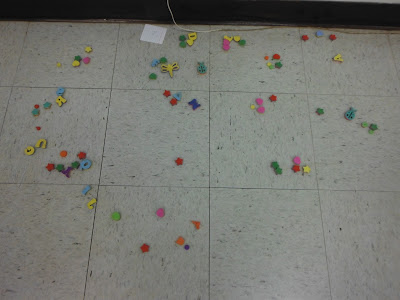 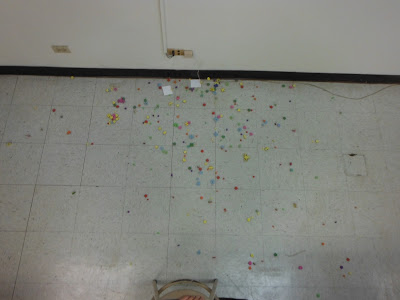 At 9:00 I tossed 265 beads, including round beads, used both hands, and was more careful in centering my toss direction and follow-through. I obtained a nicely symmetric normal distribution, perhaps a tad leptokurtic. Round beads are important, outliers happen but they also help increase the spread.