An exploration of friction

February 12, 2016
In the wake of abysmal performance on quiz 044 the prior Friday, this past Monday I went back to the sidewalk and ran again the RipStik height versus velocity demonstration from the Monday prior. I used the 27 cm post, this time having the students time the last 200 cm of my descent. This worked rather better, this time the students appeared to grasp where the speed data was deriving from. I had three people time and took the median time. I then noted that there was a post which was 54 centimeters above the hill base. I asked what two times 27 was equal to, which the students answered as being 54. The median time had led to a speed of 256 cm/s from the 27 cm post. I asked for a prediction from the 54 cm post and obtained a guess of 512 cm/s. I noted to the class that this was a linear model that they were using. I ran the run from 54 and the median time on the three stopwatches was 317 cm/s. Well short of 512 cm/s. Faster than 256 cm/s, but not as fast as twice as fast. Which led naturally into the language of the quiz. I also noted that friction was playing a role in the demonstration, as it did during the banana leaf marble ramp demonstration.

By Monday evening I knew I really wanted to do a force of friction laboratory for week five, but what to do? A quick Google search suggested the old wood blocks on different textures. I mulled it over for 24 hours and realized I really did not have time to acquire blocks and the necessary hook eyes. At some point my slabs of glass drifted into my brain and my son's penchant for using glue gun glue for everything. There was a flash when the glue gun connected with the glass slabs. String loops glued to glass and dragged across sheets of sandpaper using spring scales. On Wednesday I grabbed the inputs and played with the system at home. I knew almost immediately that the pulleys lab was going out the window in the morning and I would wing it with friction.

I thought about making a handout, even prepared one, but in the final seconds decided the lab should feel completely ad hoc, a night at the improv, totally minimalist. The board reveals this minimalism. I would only add "Which variables have the least effect?" 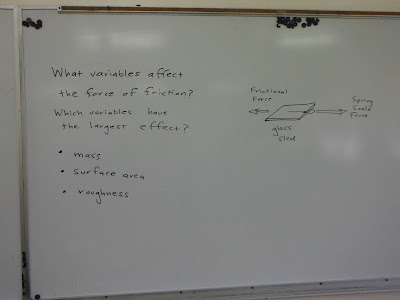 The equipment is basic, at least for a physical science equipped laboratory. A glue gun, spring scales, weights, string, sandpaper of various grits. The louver glass is plentiful here, I created my own "sleds" back when I set up an optical depth in glass lab years ago. 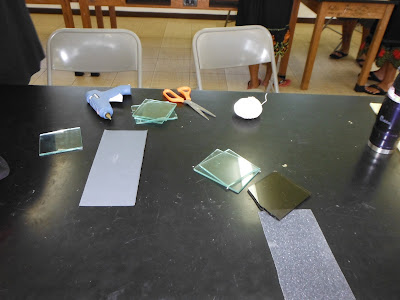 Some of the basic equipment can be seen above. 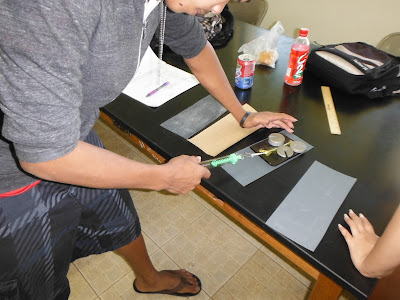 A test run where the student is exploring what happens when the mass of the sled is increased using slot weights. Although the spring scale can be used to mass the sled, I also have a 2000 g digital scale on hand. 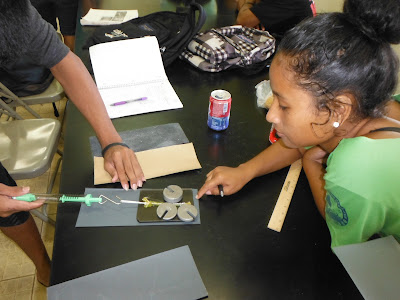 Jury-rigged is the key phrase. Sure, the sandpaper could be mounted on plywood, or Rebecca could hold it with her finger. 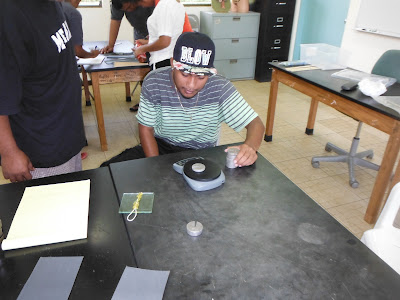 Digital scale - Drexler is trying to see if the slot weight is correct. 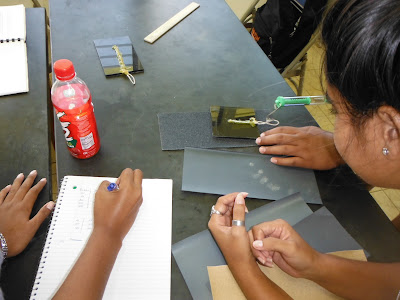 The basic set-up can be seen above: the string is attached to the glass using hot melt glue. 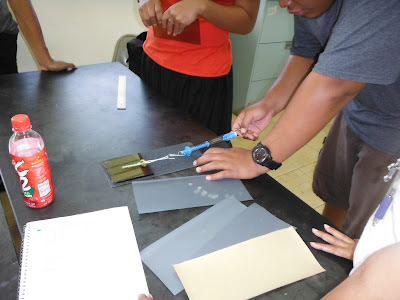 The glass sled can be pulled empty. The glass does have some sharp edges, but in a place where children use machetes I know I only have to caution the students and they will be careful. 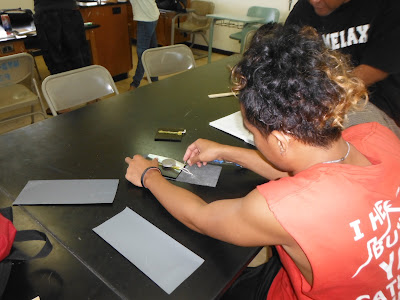 Rennie tests the effect of different grits of sandpaper. 60, 120, 360, 600, and 1500 were available. In general the grit seemed to have either no effect, a somewhat random effect, or a non-linear effect where the maximum frictional force occurred for the 600 wet or dry sand paper. 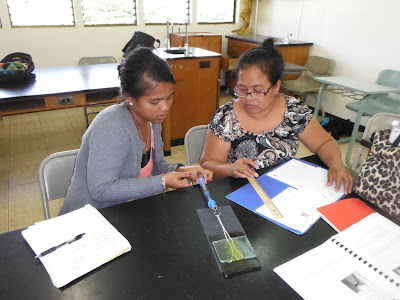 Darleen Charley draws a double-sided sled across the piece of sand paper. This concept was developed by Rennie Glen Taiwerpal and was sheer brilliance. I had been struggling to get two glass sleds with different surface areas to have the same mass by loading the smaller sled with weights. Rennie took two glass louvers of different sizes and glued them together with the string in the middle. It was brilliant. Two different surface areas, exactly the same mass. Cynthia is recording data. 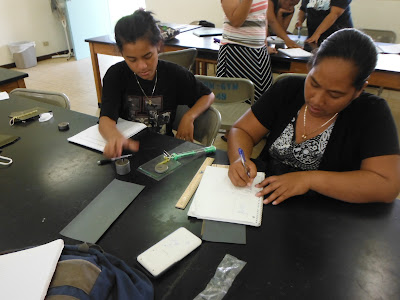 Tricia Helgenberger and Kamerihna Santiago. This group did the most careful measurements with Kamerihna pulling sleds on five or more runs for each single data point. Puzzled by the way the results were coming in, she went back to recheck her measurements. At one point she looked up and said, "This is science!" I knew then and there this lab was a keeper, as that is a goal of the course. Not to learn "about" science but to do science. 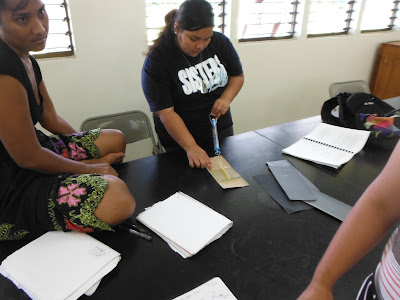 The lab had been a success, but what to do with Friday? The cantilever demonstration made even less sense than usual. And a quiz did not fit well given that the groups were coming to different conclusions based on their data. I realized that a discussion of the divergent findings would be the best option, but how to get this to happen? A note on something completely different came in on Thursday asking about whether I would be interested in attending a workshop. Bingo. Every profession has workshops or conferences where people break up into smaller groups, scrawl on poster pad, and then present to their peers. This is a life skill. Friday would be workshop day, sans coffee and donuts. 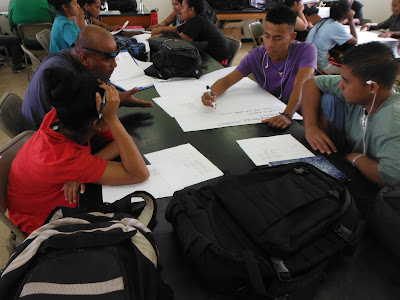 I  walked in Friday, counted 24 students, and then counted them off by sixes to form six groups of four people. I explained about how life in the modern age included workshops. I used the count to force them into new groups. 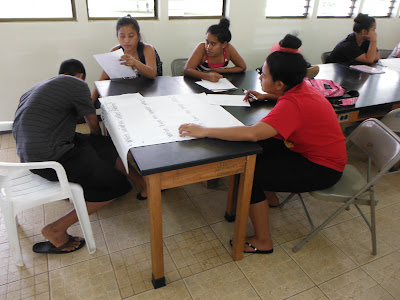 When a couple of my consistently tardy students came in late during the set-up process, I sent them to the back of the room with the intent to form a seventh group. There followed three more late arrivals, one by one, to whom I said, "Go, go to the back of the room." I got the 24 on-time students set up with paper, markers, and hand-outs while the five tardy students sat at the back. 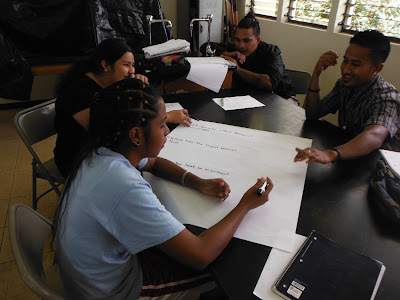 Each group tackled the same three questions: Which variables affected the force of friction, which variable had the most effect, which variable had the least (or no) effect. That was their only guidance. Time would be tight, I told them they had about 20 minutes to put something together. I told them they could use their data from the lab the day before, or they could also use data I had captured from one of the groups on Thursday. 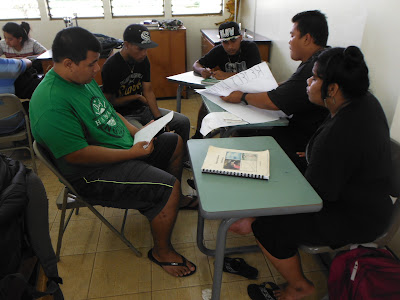 The result was a lot of science being discussed and sorted out, and no one falling asleep in the midday class. 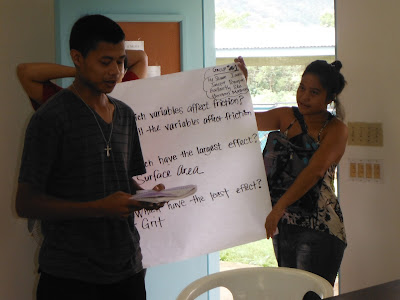 Jansper Ponapart led off assisted by Tae Shawn Mae Jeanette Ioanis. The groups reported out in order beginning at about 12:35 - 12:40. Group one felt surface area had the largest effect. The group, as did some other groups, gave the impression that they took the three questions as having to have three different answers. 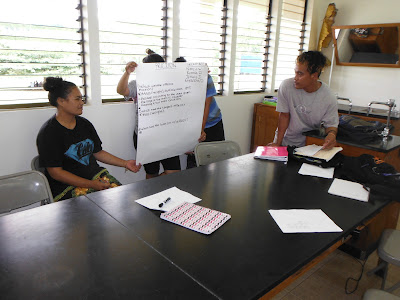 Rennie noted that his group decided mass had the only significant effect and thus the most effect. 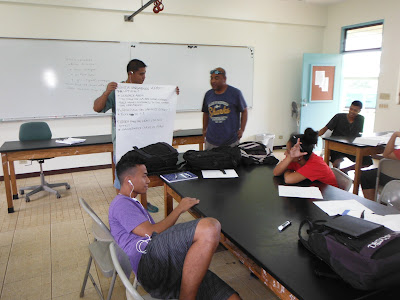 DeBrum Melander presented for group three. His group settled on surface area as having the most effect due to higher force values. Their group decided that grit had no impact on friction. 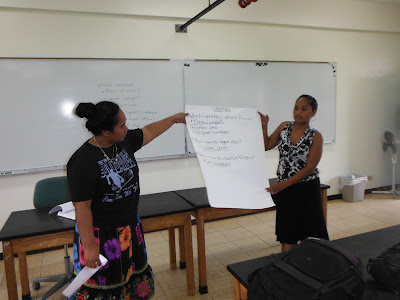 Kamerihna and Hellen Abraham cite all three as having an effect with surface area having the most effect, grit the least. The presentations provided an insight into student thinking about friction and demonstrated that data is open to interpretation. 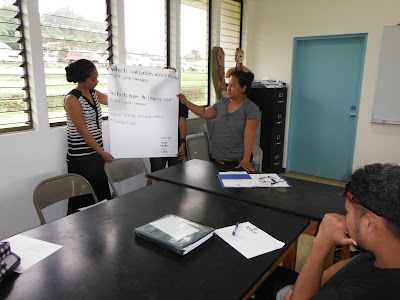 Cynthia Sonden presented for group five which felt grit had the most effect, while surface area had the least effect. The time constraints were such that there just is not time to sort out the obvious differences between groups, and reaching a final "correct" answer was not a goal of the exercise. The data is open to interpretation, and some groups did see distinct surface area effects. Friction is complex and sorting out signal from noise is difficult given the equipment at hand. Note too that I never mentioned "static friction" nor "kinetic friction" although they all implicitly "discovered" this during the laboratory. 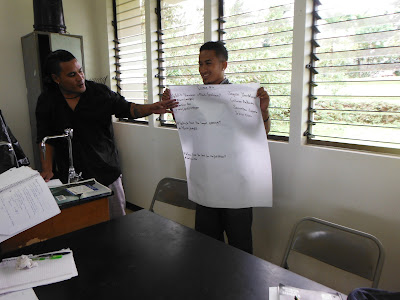 Group six, with Jayvin Yarotalmar presenting, felt all three variables have an effect, but mass had the most effect with surface area having the least. 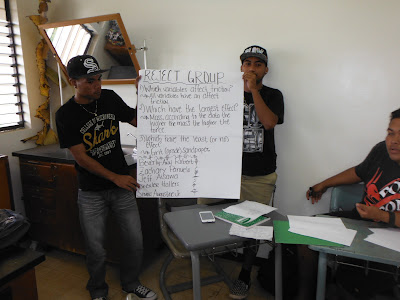 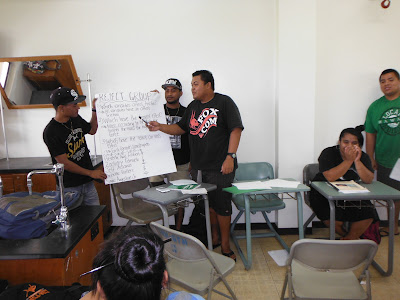 The handout provided data tables and graphs. The data in the tables came from a student group the day before. The third table utilized a 133 gram double-sided sled based on Rennie's design. Thus for the third table the mass was the same for all runs.