October 13, 2015
This term I utilized the vastly increased Internet bandwidth to show a set of YouTube videos streamed in real time. In the past I had downloaded videos to show to the class to end run the bandwidth limitations at the college. This term the bandwidth has generally been sufficient to be able to plan to use YouTube videos in a class, streamed in real time. Although I now want to improve my play list, I did not expect that I would be able to stream YouTube at midday at the college. I had a DVD on hot standby. The DVD was less appropriate to the cloud theme for the week, but in the past that is what I have used. 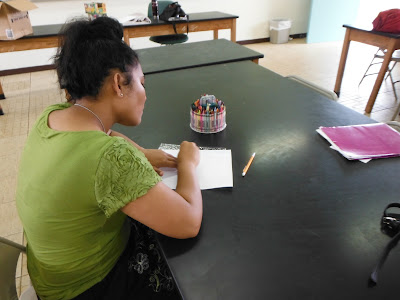 The switch to cloud focused videos really helped reduce apparent friction and resistance for laboratory eight, and that was a plus this term. 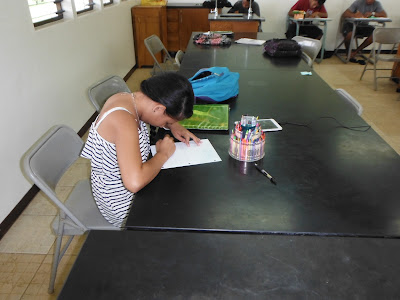 With a developing El Niño on the ocean, this term was clearly a term in which to focus on the impending drought in early 2016. I wanted to focus on communication. I tasked groups with preparing a bulletin for villagers, farmers, fishermen, on the storm and drought risks associated with the upcoming El Niño. Principal sources for the briefing came from the Pacific ENSO update with additional and more up to date information from El Niño/Southern Oscillation (ENSO) Diagnostic Discussion. 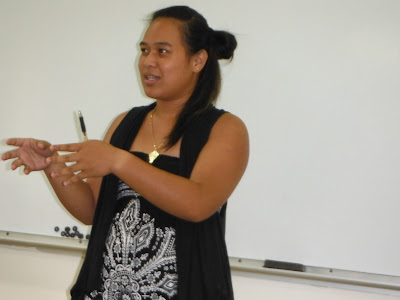 One group was tasked with explaining the SOI index, another with providing the definition of SST. Most of the students were tasked with providing an island specific public service style announcement for the areas covered in the PEAC update, American Samoa, Guam/CNMI, Yap, Chuuk, Pohnpei, Kosrae, Palau, RMI, Hawaii. A final group provided an advisory update. The island specific forecasts were based on the August 2015 third quarter report, the fourth quarter not being available. The final group used a 10 September update to provide more recent information on the El Niño. 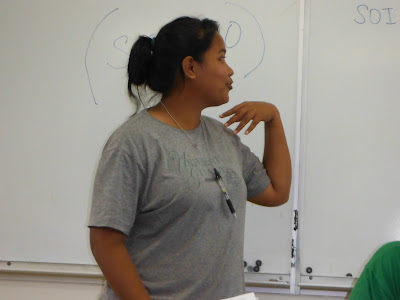 
The presentations were scored via a rubric and the scoring was done by the students. Each student had a scorecard and rated the presentations against the four metrics. Point system:

The island specific presentations were framed with the prompt, "Present a briefing on the projected storm and rainfall impacts of El Niño that would make sense to a villager, farmer, or fisherman." I did the group selections in order to place students from Chuuk state in the Chuuk group, Pohnpei in the Pohnpei group. Groups which spoke their state language were directed to do their presentation in the local language. The rest were instructed to use English. The Chuukese group consisted of four outer islanders from two language groups, with dialectical differences between the two students from one of the language groups. They opted to each speak in their own language, and their presentation captured the highest overall rating. 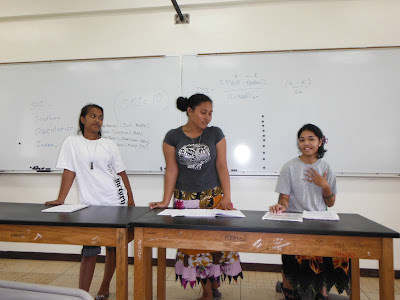 The presentations went reasonably well on Friday, but for a PSA they were a tad too long and overly focused on telling the audience what had happened. There was a tendency to read the bulletin to the audience, which included rainfall amounts, storm history, and other factors that the audience would probably also know. 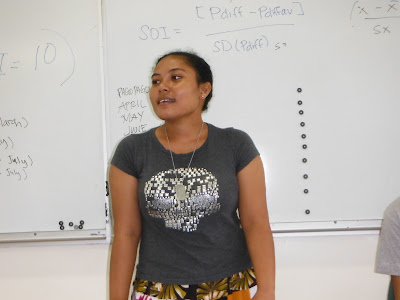 The presentations might benefit from a fixed time limit. On Friday, the day of the presentations, only the SOI index, SST, American Samoa, Guam/CNMI, Yap, and Chuuk groups completed their presentations. The complication is that with twelve groups and 55 minutes, plus rubric marking time, presentations would have to be limited to three minutes, potentially insufficient especially for a trilingual presentation such as Chuuk state. 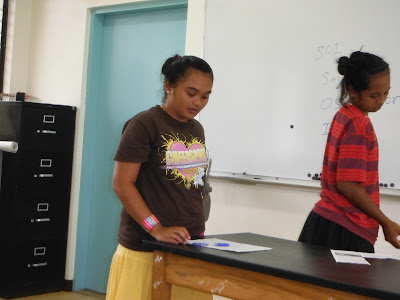 The presentations spilled over into Monday. While the remaining presentations did not fill Monday, moving on to waves in the final 15 minutes of class did not make sense from a readiness to learn perspective. 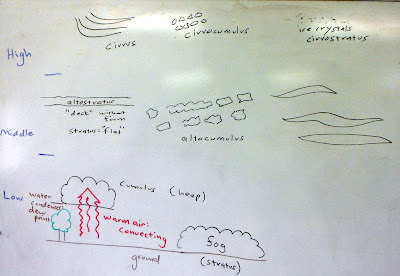 Another change made this term was the dropping of the subtypes of cumulus. Running with the information presented in the videos, this term the focus was on identifying cumulus, stratus, altocumulus, altostratus, cirrus, cirrocumulus, and cirrostratus. C. castellanus, C. humilis, C. congestus were tossed out. This eliminates the debate over whether a cloud is humilis or congestus. And simplifies the learning task. 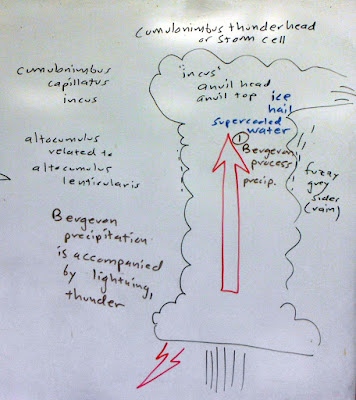 I did include Cumulonimbus capillatus incus. 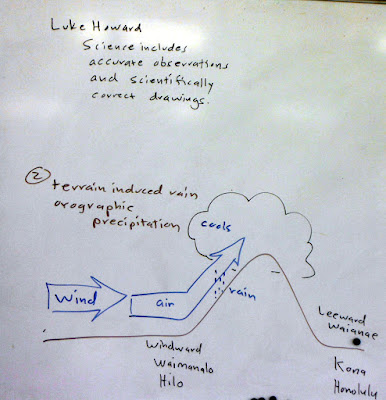 The video on Luke Howard, while not optimal, was beneficial in that the video apparently included some of Luke Howard's cloud sketches. Paintings done by Edward Kennion in consultation with Luke Howard are in the Science Museum Group collection. 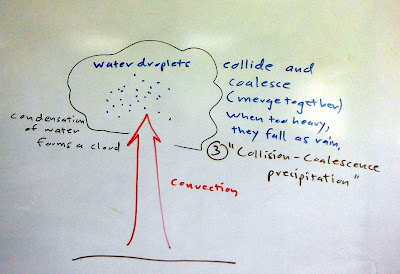 That provided a crucially useful link to the cloud drawing laboratory, with the bridge piece that scientists were once also artists, up until photography replaced the use of art in scientific observations.
physci