September 07, 2015
A convenience sample survey of social media and stimulant preferences was given to 40 students in three sections of MS 150 Statistics at the College of Micronesia-FSM fall 2015. This term the survey was administered via a modified Schoology quiz that was used to pose options as multiple choice questions. The quiz and questions carried zero points, there were no right or wrong answers. The number of students who took the quiz is lower than prior terms - 69 students completed a paper based survey spring term 2015. The change in delivery modes and the decrease in the sample size make term-on-term comparisons problematic, but the overall social media landscape for the students appears to be fairly stable. 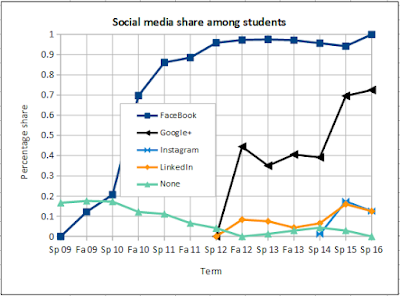 Instagram and LinkedIn did not show any increased traction among students, and only a single student reported using SnapChat (not charted). FaceBook remains the dominant singular social media site for students.

FaceBook remains the social media place to be and to connect with students. During the time the survey was open, FaceBook logged a record breaking one billion individual logins in a single day. One in every seven people on the planet logged into FaceBook on that particular Monday. FaceBook is a shared presence in modern life like no other prior computer technology.

As an anecdote, students who are accustomed to regularly managing their FaceBook presence appear to be better able to interact with learning management systems. FaceBook users are accustomed to keeping track of a username and password, navigating among screens with different functionalities, and making decisions on what to post. Students who do not as often use or do not use FaceBook are the students who come for help due to forgotten usernames and passwords, and difficulty understanding how to use learning management systems. This is all anecdotal, only impressions I get from working with students. 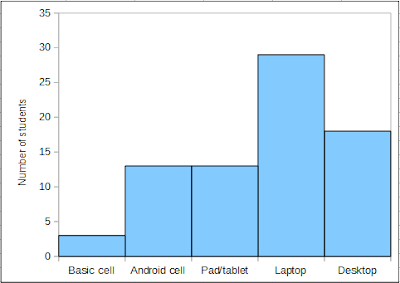 While basic cell phones are fading as a technology, students still rely heavily on laptop and desktop computers for access to the Internet. When asked how they accessed the Internet, 73% indicated use of a laptop, 45% indicated use of a desktop. Note that the question allowed multiple responses, the total number of students was 40. A third of the students use smart phones or pads/tablets.

The survey also explored stimulant usage among the 40 students surveyed. 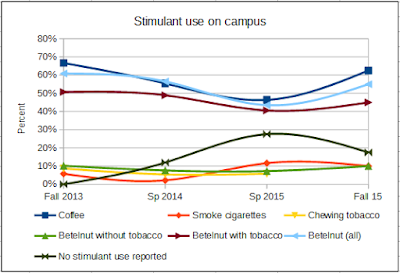 The change in the sample size also impacts the stimulant use survey. With that caveat, there is the suggestion that betelnut usage has climbed from 43% to 55%, with the particularly carcinogenic combination of betel nut and tobacco showing a slight rise as well. Given the sample size issues, the safest conclusion is that betel nut use rates among students remains essentially unchanged at about 50% to 60% of the students chewing betel nut.This puts raw population numbers at somewhere around 500 to 600 students chewing betel nut on campus.
statistics tech